A lot of Company novels

By Jean - May 12, 2016
In the Garden of Iden, by Kage Baker
Sky Coyote,
Mendoza in Hollywood
The Graveyard Game
Black Projects, White Knights

As you know from my earlier post, I fell down on the Faerie Queene project last weekend when I was kind of under the weather.  The universe handed me a make-up gift, though, when my ILL of the second Company novel arrived at just the same time, and I zipped through 4 books in 3 days.  I hadn't yet gotten to post about the first one, so I'll just put them ALL here....

First, the setup.  In the 24th century, some people figure out how to make immortals, but there's a catch.  It takes massive surgery and augmentation, and only works on tiny children who fit the physical profile.  Not very useful for rich old people who want to keep living.  They also figure out time travel...but you can only go backward, and you can't change recorded history.  So they form Dr. Zeus, a company that exploits these two technologies by taking orphaned historical toddlers, raising them into Company operatives, and getting them to preserve, steal, or manipulate events behind the scenes.  There is a wonderful cancer treatment in a particular plant species that went extinct in 1400.  There are cellars full of hidden art long thought destroyed.  And so on.  Dr. Zeus has a massive concordance of events, but it only goes up to 2355, after which there is no communication at all.  What will happen when the Silence arrives?  And what will the cosseted citizens of the 24th century do with a bunch of tough, manipulative immortals?

In the Garden of Iden: This is Mendoza's life story--how she became a Company operative and her first assignment in Tudor England, posing as a Spanish lady during the reign of Queen Mary I.  She's nervous around mortals, but she gets to live near a large garden stocked with interesting plants to study and save...and then she meets Sir Walter's secretary, Nicholas, who is young, intelligent, and a fanatic heretic.  They fall in love and Mendoza, still young and naive, dreams of ways to save Nicholas. 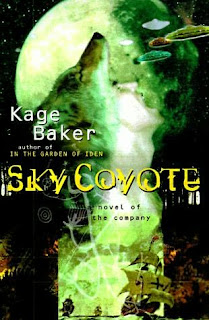 Sky Coyote features Facilitator Joseph, assigned to Point Conception in California (which is right near my hometown, incidentally).  It's 1700 and the conquistadors will arrive within a few decades, so Dr. Zeus wants to save an entire Chumash village.  The stories will go into a library, the work and habits will be recorded by anthropologists, the artifacts will be saved...and the people will become employees of the Company.  Joseph's job is to impersonate Sky Coyote and convince the people of Humashup to go along with this plan.

Mendoza in Hollywood:  About 150 years later, Botanist Mendoza is assigned to save species native to Southern California before a dire drought kills them off (as starving cattle eat anything around).  She and several other operatives staff a stagecoach inn along a road that will someday become Hollywood, and they have some interesting adventures, and then an English spy arrives who is the exact double of Mendoza's long-lost mortal love, Nicholas.  Neither of them know that they are both tools of Dr. Zeus' long-term plans. 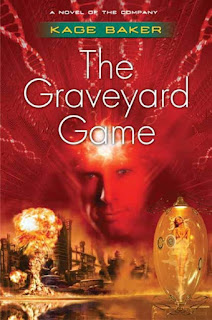 The Graveyard Game covers a huge amount of time, as Joseph and Literature Preserver Lewis start talking.  Nobody has heard from Mendoza since 1863, when the Company made her disappear.  Joseph and Lewis are determined to find her, but they both know it's dangerous to pry into secrets.  Clandestine work is tricky when your every move is monitored, too.  It takes them decades, even centuries, but they uncover some unsettling information about Dr. Zeus' plans.  What happens when immortal operatives become inconvenient?  What's so special about Catalina Island?  And does anyone know what will happen in 2355?  Operatives are told that they will then be free to live openly in an idyllic future, but somehow that seems unlikely.

Black Projects, White Knights is a collection of short stories about preservers working in history to save (or, why not, commission) historical treasures.  Mendoza and Joseph try to buy a particular grapevine that will someday produce a unique wine; Lewis is thrilled to work with Flinders Petrie on an Egyptian dig, but there are a few things he's supposed to grab while he's there; Kalugin, whose specialty is going down with shipwrecks in order to save treasure, runs into a snag.  There are also several stories about little Alec Checkerfield, a 24th-century child who is more talented than he ought to be.  Future society is extremely regimented and conformist, but Alec wants more than anything to be a pirate.

I had a great time reading these, and am now on the next one.  It was a good idea to read them close together--there are a lot of details and clues, and it's better to keep them fresh.  I'm pretty sure I did not read all the books in the series the first time around, too.  This time I'll try to get them all.
Re-Reading Challenge SF/fantasy