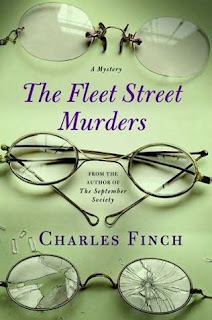 It's the third Charles Lenox mystery!  I actually liked this one better, mostly, except for one thing.

It's Christmas, and Lenox is engaged to Lady Jane, so all is right and happy in his world.  He's hoping to run for Parliament soon--he's always dreamed of it, and his brother is an MP--but it all happens very suddenly when an MP for the northern town of Stirrington dies sooner than expected.  The election's in two weeks, so Lenox gets going.  I think over half the novel is actually about the process of running for MP!  It was pretty fun, really.

There's a murder, too.  Two prominent newspaper men killed at exactly the same time.  The police are baffled, Lenox is dying to help, but Stirrington is far away.  So there are a lot of telegrams, and a couple of fast train journeys.  It's a pretty good mystery

The only glaring problem here was in the continuation of the delicate society lady's pregnancy, continued from last time.  She goes to the doctor all the time.  She fusses about whether to paint the nursery pink for a girl or blue for a boy.  Sadly, she then loses the baby--she is less than 12 weeks along at this point--and she and her husband each blame themselves.  The whole thing is just so modern, which detracted from the story.  It's not in the least bit Victorian, any of it.  Then it's less than a month before she announces she's expecting again and all is well.  ARGH.

But on the whole it was an improvement.
mystery TBR challenge