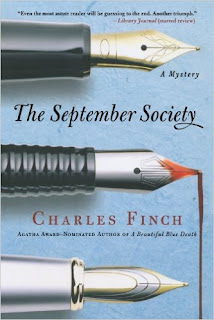 The September Society, by Charles Finch

Charles Finch writes a Victorian mystery series, starring gentleman detective Charles Lenox.  A year or so ago, I read the first Lenox mystery, A Beautiful Blue Death.  I was a bit disappointed, but I did eventually get around to reading the second one.  (I have four of them.)  This time it's in Oxford...

A distraught mother asks Lenox to investigate the sudden disappearance of her son, George, a popular Oxford student.  Lenox notices some odd things placed around George's room, as though he was trying to leave a message, and then finds that George's best friend is gone too.  It doesn't seem too serious, until George turns up dead in a nearby wood.  As Lenox pursues tiny wisps of clues, he starts to think that the beginnings of the case may lie in the past, in India, and that the small and unimportant September Society may be more significant than it seems.

Last time I read a Lenox mystery, there was an amusing bit about a ballroom and the transit of Venus (see link above).  I wondered if there would be anything similar this time, and I was not disappointed.  At one point, Lenox is taken to see a young man who has invented the science of ballistics fingerprinting--he can look at a fired bullet and identify the gun it came from, matching markings left by the rifling in the barrel.  Ahem.  This story is set in 1866, well before forensic ballistics was a solid thing (though somebody had noticed it), and there has never been 100% accuracy, as this fellow is supposed to be able to achieve.  I read the passage aloud to my husband and enjoyed listening to his howls of frustration.

It's not a bad mystery, it's just also not great.  I am not grabbed.  I do not care much about the characters, and the historical setting seems kind of sloppy to me.  A wealthy lady's dress is described as a slim column, when it ought to be something Scarlett O'Hara would choose.  People are forever calling each other by their first names, even when they aren't close friends.   A dainty society wife announces her pregnancy when she is less than 3 months along, and in mixed company!  Things like that.
mystery TBR challenge