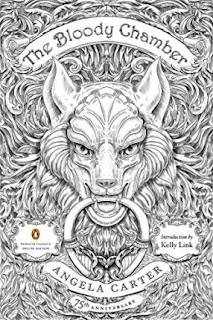 The Bloody Chamber, by Angela Carter

Well, I'm at least a week late with this blog post. Lory had a read along for Witch Week that featured this now-classic book of feminist retellings of fairy tales.  (I have my own ideas about the feminism of fairytales, and in fact just started reading a book...)  Anyway, this collection is from the late 1970s, and you can really tell.  There is a lot about sex, and blood.  More than I would prefer.  It's an OK book, I guess, but it's not really my kind of thing.

I quite enjoyed some of the stories, though, or a good deal of them.  There is one about the last of the lady vampires that I enjoyed, and "Wolf-Alice."  "The Bloody Chamber" was mostly quite good, but I got hung up on a detail that about drove me mad; the narrator describes herself going to the opera in "a sinuous shift of white muslin tied with a silk string..."  Well, the sewist in me promptly objects, muslin is an evenweave cotton and it may be fine, fresh, delicate, or even crisp, but it isn’t sinuous.  Unless perhaps it was silk muslin, but if you’ve got silk muslin you always say so, because it's unusual.  A silk muslin shift might possibly be sinuous and eye-catching (and also pretty transparent), but charmeuse would really be more the thing.  I mentioned this to Lory and she sensibly opined that Carter was probably going for language over textilic correctness.

I thought "Puss-in-Boots" was mostly annoying.  But it was, at the very least, good for me to read this famous collection.

One thing I do have to say is that there have been a lot of pretty great covers for this book, and more art on the Internet than you can look at.  Here is the latest incarnation on a new Penguin anniversary copy, though it's not the copy I got (through ILL, but I did also order a copy for work).  Which reminds me--have you noticed all the oddball "anniversary editions" out lately?  This one is for Carter's 75th birthday.   I recently saw one for Orwell, though I can't remember what the rationale was.

ANYWAY, thanks to Lory for putting on an awesome Witch Week, which I mostly failed to participate in!  It really was great though and I will look forward to next year. 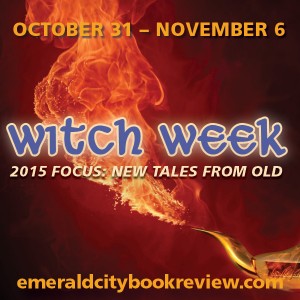