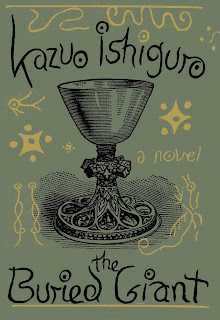 The Buried Giant, by Kazuo Ishiguro

I've had a spotty track record with Ishiguro.  I didn't really like Never Let Me Go at all.  But I thought I'd give The Buried Giant a try since it's about Anglo-Saxon Britain.  And it's a pretty odd book, but I really liked it.

Axl and Beatrice are an elderly married couple on the social edge of their British village.  The Romans are gone, and Arthur lived a generation ago; the Saxons have come and live in separate villages of their own.  A strange forgetfulness lies across the land, and no one is able to recall much of the past or even stay focused on one idea for long, but Axl and Beatrice finally remember that they have a grown son, and they decide to go on a journey to find him.

They meet a Saxon warrior and a young orphan boy (in a scene reminiscent of Beowulf), who then join them on their travels.   We meet Sir Gawain and start to get an idea of what troubles the land, and the whole thing is a sort of fairy tale (magical realism?) that asks questions about the nature of love, hatred, and forgiveness.

I can see why a lot of the reviews I read are either negative or just puzzled.  It's an odd duck of a book.  I really liked it though.
English literature modern fiction