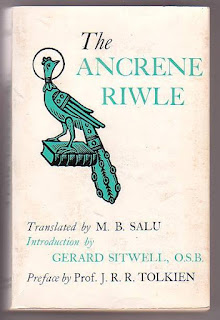 The Ancrene Riwle: A Rule for Religious Women, trans. by M. B. Salu

I'm still making an effort not to type, so here we go with another dictated post.  (Note after finishing: voice software mostly does not get the word "anchoresses," but it sure does make some creative stabs at interpretation!)

While I was reading The Fellowship, it mentioned that Tolkien had taken on a project of translating a rule for anchoresses written in Anglo-Saxon. It took him ages to finish, of course. I don't think he managed to publish until the 1960s, or even later. But I instantly needed to read the book. It turns out that Miss Salu got in ahead of him, and this translation from the 1950's is the most readily available. Tolkien put in a nice introduction, which I must say was gracious of him.

This rulebook of instruction was written in a Western dialect of Anglo-Saxon in the 14th century, by an unknown author who was addressing three women - they seem to be sisters - who were going to be anchoresses. What is interesting about this rule is that the author says many times that the women should not overdo their asceticism. They should not fast too much, and their prayers should be moderated so as to fit their health and strength.

The first chapter contains instructions on how to pray the offices every day, which takes up a large part of the day.  Then he goes on to  self control - it turns out that anchoresses are not supposed to peek out of their windows all the time. Nor should they listen to gossip, and they should never look at a man. An anchoress should be calm, and when she is not praying she can read uplifting books or work at sewing clothing for her household or for the poor. Surprisingly, she should not give a lot in charity; this rule presumes that she will be living in poverty, and will not have a lot extra unless she begs it from others. Begging alms from other people in order to look generous oneself is not okay, and "between an anchoress and the lady of a house there should be a clear distinction."

I had always thought of anchoresses as people living in tiny cells next to the church, with just one room and a little window to get food through. But these anchoresses are obviously not going to live that way. They have a house, and they have some maids as well. when I read The Quest for the Holy Grail last year, I was surprised by the description of the hermit lady who had an entire household, but this actually sounds very similar. Now I am curious as to how anchoresses lived in England, and whether there was a variety of anchoress lifestyles.

The rest of the rule talks about how to find a good priest (not too good-looking or young), and how to make confession and do penance. Most particularly, the author wants these anchoresses to remember that the point of their existence is to love God and others. External rules are completely secondary to this, and are flexible, able to be customized to the anchoresses' situation and strength.

The author spends much of his time on the temptations chapter, and it is filled with the kind of scriptural interpretations that medieval people loved to make. At that time, every scriptural story was considered to have at least two meanings: the historical event that had actually happened, and the symbolic meaning that could be drawn from it. God had placed these meanings into the stories for people to find.  Almost certainly, a good scriptorian could find more than one hidden meaning in any story and suit it to the situation at hand.   These get to be quite detailed and draw upon even the smallest Biblical incident:


...in the Book of Judges, after Josue's (Joshua's) death, when the people asked who should be their leader and lead them in battle...Our Lord answered then: Juda shall go before you and I shall delier your enemy's land into his hands."...'Josue' means 'health' and 'Juda,' like 'Judith,' 'Confession.'  Josue is dead when the health of the soul has been lost through any mortal sin.  The sinful self is the land of the enemy, our deadly foe, but Our Lord promises to deliver this land into the hands of Juda, and for that reason he goes before you.  Thus Confession is the standard-bearer and carries the banner before the whole of God's army, that is, the virtues.  Confession despoils the devil of his land, that is, of the man who has been sinful, and puts to rout Canaan, the army of the devil of hell.  Juda did this physically, and Confession, which is thereby symbolized, does the same thing spiritually....

There is a whole lot of this sort of thing, plus some fabulous stuff where he categorizes the seven sins into monsters with children, so that the Sow of Gluttony has five young, or different kinds of gluttony.  Covetousness is a fox, lechery a scorpion, and so on.

On the whole, it's a pretty interesting medieval text, but it sure does drag in the middle over the temptations (once you get past the fun monsters).