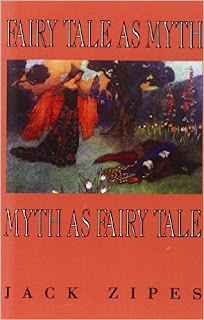 I was excited about reading these lectures by Jack Zipes, the big academic specialist in fairy tales, especially Grimm's fairy tales.  If you've read or seen the giant Grimm's collection, he's the editor.  I was looking forward to some nice chewy discussions about myth and folklore.  I was disappointed, and when I wasn't bored, I was arguing with Zipes in my head.  Bleh.

There are six essays in this volume.  The first is about the origins of the fairy tale, and talks about how French aristocrat ladies would write stories for each other or for girls.  This was the part I liked best, talking about how Madame D'Aulnoy "intended to present a woman's viewpoint with regard to such topics as tender love, fidelity, courtship, honor, and arranged marriages...one must be cautious about labeling her an outspoken critic of patriarchal values or to see feminist leanings in her writings..."  He then goes on analyze Beauty and the Beast, blaming D'Aulnoy for not teaching girls true feminism and to go for what they wanted.  Instead, she instructs girls to "tame their unruly feelings" and do their duty.

Myself, I can't help thinking that representing women's viewpoints in tales and pointing out that tender love and fidelity are good things in a husband is pretty feminist for the early 18th century.  I wonder what Zipes thought would be the result if D'Aulnoy started advising girls in the way that he wants her to have done.  I think it possible that she would have been considered mad and simply locked up.  Her tales certainly wouldn't have become popular.

An essay on Rumpelstiltskin did catch my interest because he spent a lot of time talking about spinning as the province of women.  On the other hand, I wasn't thrilled with his analysis and prefer Elizabeth Wayland Barber any day.  But he did describe a common social institution, the Spinnstuhe, where young women would live together (supervised of course), working and socializing.  Young men could come and visit in the evenings.  It sounded pretty good as a way for young people to meet and pair off in a safe environment.

The essay on the Disney influence on fairy tales was one I looked forward to and really disliked.  I don't even like Disney films much, but Zipes has nothing good to say about the cartoon industry, Disney, or any movies depicting fairy tales.  It came off as grumpy and unreasonable to me, and I was prepared to criticize Disney films.  Also, he's given to saying things like "No matter what they may do, women cannot chart their own lives without male manipulation and intervention..."  which he figures is unequivocally a bad thing.  But I have to think, well, turn it around.  Do men get to chart their own lives without reference to female opinion?  Neither is very likely, is it?  If he'd phrased it more reasonably, I'd be more receptive.

I'm probably not really equipped to get the essay on Oz as the American fairy tale, because I'm not a big Oz fan.  I read all the books as a kid, but I never got into the movie or the sequels and spinoffs (I did see Return to Oz in the theater, boy was that creepy), and Zipes really mixes them all up and talks about Oz in the popular imagination instead of Oz as described in the Baum stories.  His descriptions of Oz seem overly optimistic to me, especially when he says that Baum described Oz as a "perfect utopian world."  I don't remember that--I remember crazy stuff and rebellions and weirdness.  But then, I was ten and I didn't realize that Baum was making fun of General Jinjer!  I thought she was cool.

I skimmed the last essay.  He talked about that 80s show, Beauty and the Beast, a lot, but I never watched that show.  On the whole, I am kind of disappointed in this collection.
essays folklore TBR challenge