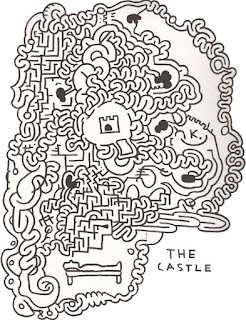 The Castle, by Franz Kafka

This unfinished novel is one of Kafka's longer works, and it's, well, Kafka-esque.  So much so that I had kind of a hard time with it; 400 solid pages of never getting anywhere got pretty difficult to take.

K. arrives at a village to take up a job as a land-surveyor at the Castle that overlooks the little town.  Everyone there either works for the Castle or wants to land a job there, but K. is not allowed to go there.  Nor can he meet with Castle officials.  There doesn't seem to be any land-surveying to do, but he is assigned two assistants, who do nothing to help him but do bother him a lot.  He makes friends with a messenger who isn't quite a messenger, and he meets a girl and becomes engaged, but that doesn't last long.  All his efforts lead nowhere.

All the conversations K. has with people in the village are the same; long, long monologues about village/Castle relations that meander around, contradict themselves with almost every sentence, and delve into careful distinctions that are so fine and nuanced that they don't really exist.  Nobody really knows much, but they're certainly willing to make it up.  Round and round we go with K., trying to get something done and never succeeding.  He might as well give up and die.

Kafka died before he could finish The Castle, and he may not have meant to anyway, but the ending he mentioned to Max Brod involved K.'s death, at which point the desired message from the Castle finally arrives--only to inform him that his "legal claim to live in the village was not valid, yet, taking certain auxiliary circumstances into account, he was permitted to live and work there."

I read the Muir translation in the 1954 "definitive" edition that includes a lot of alternate wording, fragments, and excised material, plus a foreword by Thomas Mann.  The most recent editions don't include all of that stuff and have a different translation.

I'll have to read Amerika one of these days...
Eastern European literature modern fiction