Without You, There is No Us 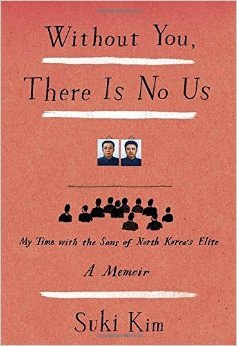 Without You, There is No Us: My Time With the Sons of North Korea's Elite, by Suki Kim

In 2011, Suki Kim, a journalist and writer, managed to get a job at the Pyongyang University of Science and Technology (PUST), teaching English to the most elite young men in the country.  She did this by going undercover as a missionary, because PUST is a Christian outfit that employs missionaries as teachers.  (They can't preach or mention Jesus or anything, so it's mainly an effort to open things up a little.)  How exactly the highest echelons of North Korea came around to agreeing to have their sons educated by outsiders is a bit of a mystery, but Kim does spend a little time speculating on that.

I think this might be a unique book, though.  Not many outsiders get to see any of the higher levels of North Korean society, so I was very interested to read about Kim's experience.  At the same time, by writing the book she was not just going to anger the North Koreans, but also PUST, which relied on her agreement to confidentiality and which probably got into trouble over this.  Kim says that she has no loyalty to PUST and doesn't seem worried about that (she seems a bit offended over the existence of missionaries), but I do.  If PUST is one of the only ways the future leaders of North Korea are able to meet outsiders, is it fair to jeopardize it?  I'm not sure how I feel about the ethics of this, even as I think it's an important book to read.  At the very least, I'm bothered.

Kim starts off with her own background, which makes interesting reading much of the time.  Her own family lost members to North Korea, and she writes eloquently about the pain of never knowing what happened.

She also writes about the difficulties of living in a closed society--so tightly supervised that she is nearly always monitored.  Teachers are mostly confined to the campus itself except for special field trips to tourist spots.  Everyday items are luxuries.  It's difficult and suffocating.  She partly reacts by obsessing too much over a romantic relationship (which is not as interesting as the rest of the book, honestly, but I can certainly understand it).

More, she writes about her students, whom she loves and thinks of as like her own children.  For children of the 21st century, they seem impossibly naive and sweet.  Having seen hardly any media, they entertain themselves by singing together and playing soccer.  They obviously miss their families terribly (living in the same city, they cannot see or visit their parents, much less friends).  At the same time, they have grown up surrounded by the cult of Kim Jong-Il, and when they are reminded of Americans, they turn very different.  Many of their friendships are assigned and involve monitoring each other.

And at all times, they lie-- glibly and without any hesitation, both to protect each other and themselves.  Kim is hugely disturbed by this at first, but comes to realize that it must be something of a survival reflex.  To me, it seemed like many of their lies were a form of expressing their true wishes.  They would talk about the parties they attended, how they slept in late, things like that, and it sounded like they were talking about what they would have liked to do without actually coming out and saying "I sure wish I could sleep in instead of standing guard over the Kim Jong-Il building in the freezing cold at 3am."  Kim only seems to recognize this when they all insist that they will be at the bus to say goodbye when she leaves, even though everyone knows it's impossible.

Kim also eloquently talks about her doubts and difficulties in teaching the boys.  On the one hand, her instinct and desire is to push them to think, to get them to realize the incredible poverty of their minds and society.  On the other hand, if they start talking about ideas, it could easily lead straight to a prison camp or death.  These boys are privileged compared to most North Koreans, but nothing will keep them safe if they say the wrong thing.  At times she hopes that they will never, never think too much, so that they will be safe.  At others, she does push.  And she went ahead and wrote the book; though she changed names and all, I should think there would still be some danger there.

Lots to think about here.  You can also visit Kim's own website about her experience and her book.
memoir/biography non-fiction