The Story of My Experiments With Truth 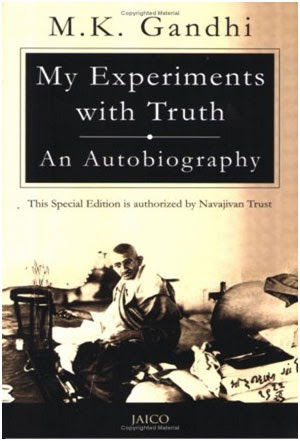 The Story of My Experiments With Truth (Gandhi's Autobiography), by Mohandas Gandhi

Experience has taught me that civility is the most difficult part of Satyagraha.  Civility does not here mean the mere outward gentleness of speech cultivated for the occasion, but an inborn gentleness and desire to do the opponent good.

I read Gandhi's autobiography for the first time when I was about 18, and I loved it.  I whipped through it in three days (which is unbelievable to me now).  So when I made up my Classics Club list, I put it on as a re-read, thinking it would be nice to re-visit a book I don't really remember too much about.

Gandhi wrote this in installments for a weekly publication, and all the chapters are quite short.  It must have taken several years.  He starts with his childhood, especially his struggles with dietary and religious questions, and goes through to cover the development of his satyagraha philosophy and its application in several early instances.  Salt came up, and the beginnings of spinning and weaving, but he does not get all the way to the independence movement or anywhere close to it.

I was surprised to see how very much there is about diet.  I got quite bogged down about two-thirds of the way through in a seemingly endless series of chapters on diet, which got more and more ascetic until he was giving up salt (a bad idea, I think!) and living solely on fruits and nuts.  He also extolled an ideal of complete abstinence in marriage.  Gandhi was also interested in experiments with communal living and farming, so there was quite a bit about various endeavors with that.

The political and historical stuff was great, though.  Just fascinating, and I wished he had written more on those topics and the development of the independence movement.

I still enjoyed this book a lot, but now, of course, I'm more engaged with what it all meant at the time, so I understand it much better.