I've been wanting to read Henry V for a long time; I never have before, so I wanted to fill in that gap.  Everybody knows what happens--I don't like writing posts about Shakespeare plays because I feel like whatever I say, it's kind of pointless.  However, just in case, this is a "historical" play about the young Henry V, his claim to own all of France, and his campaign to win it.  In a surprise fluke, the English actually defeated the numerically superior French at the battle of Agincourt, for God, Harry and St. George. 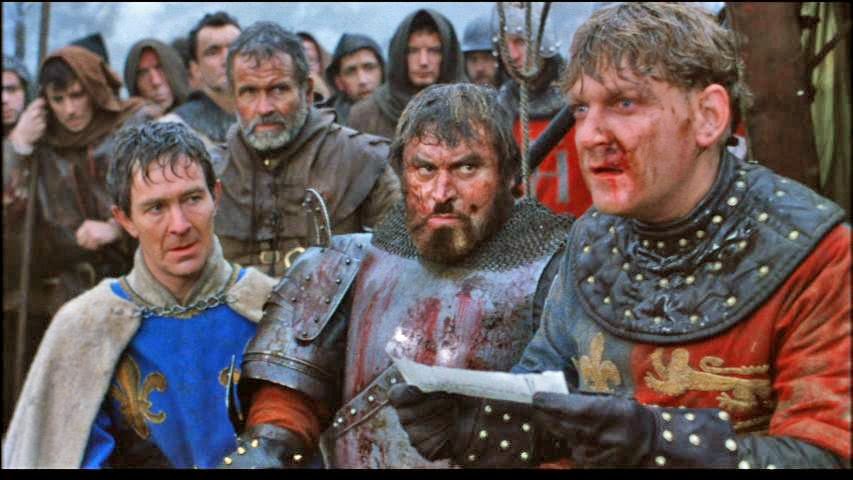 Even though I knew what to expect in the plot of Henry V, I had a really hard time getting into it.  My daughter and I got out the DVD of the movie--the 1989 one with Kenneth Branagh as Henry--and watched it together, and that really helped a lot (I got it for schooly purposes but we hadn't watched it yet).  What I mostly noticed about the film, which is beautifully produced with lots of setting and costuming, was that they cut about 90% of the dialogue from the play.  Even the most famous speeches lost a few lines.  Instead, there was much more emphasis on the visuals, with lots of time on landscapes and people doing things, and of course plenty of fighting.  To explain some background, they also added in that final scene from Henry IV Part 2 where the new king throws Falstaff off like an old pair of shoes. The film of Henry V is over two hours long; the play performed as written must be even longer.  It would be neat to see it performed like that, and I wonder if anyone produces it whole these days.

Much of this play is historical propaganda, really.  English people looked back on Henry V as a wonderful king.  The glory of Agincourt!  France right where it belonged, under an English king! Never mind the fact that ruling both France and England together was just not possible.  It was a ridiculous idea that consumed lives and years and treasure and never paid off.  Then, the Tudors descended from Katherine of Valois, Henry's French wife.  Henry left her a widow after only two years, during which he was mostly still fighting in France.  She was young and pretty, and the government was worried sick that she would remarry, so they passed a law that she could not marry until her son reached his majority (he was six at the time) and approved a marriage.  Katherine then proceeded to live with Owen Tudor and produced six children, almost certainly without getting married at all, though the Tudors claimed she did.  Henry VII was their grandson.

I don't quite know how to count this for the Reading England challenge; it mostly takes place in France, but I think it should count.  I shall put it down as belonging to Southampton, where at least one act takes place, and that is in Hampshire.