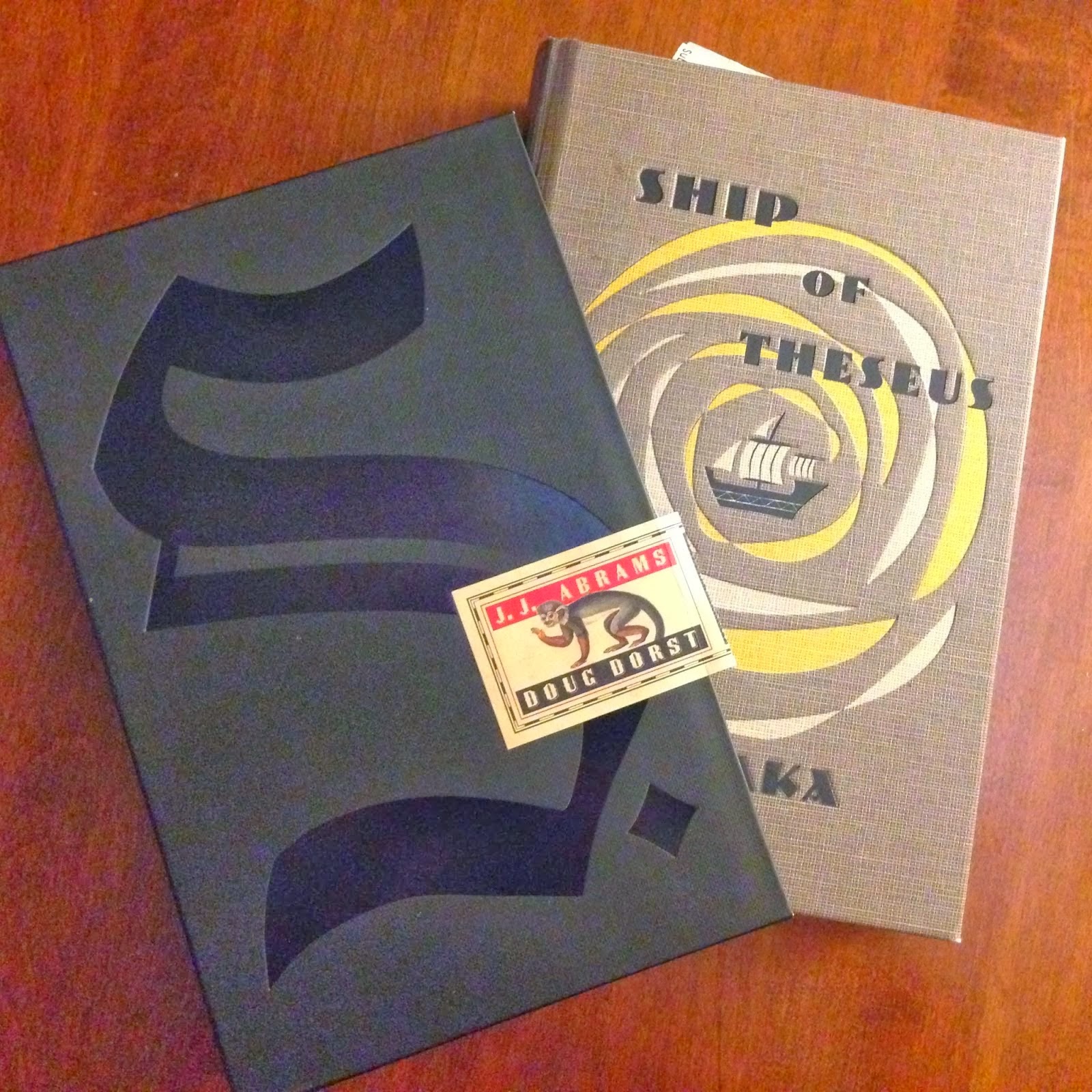 I did not know WHAT to think when I ran across this book...thing.  What I noticed first was that it was stuffed full of ephemera, kind of like Griffin and Sabine on steroids.  I thought it must be a big gimmick.  And I got curious, so I read it.

The idea is that it's a nested story.  You have a book that looks like a novel printed in the late 1940s, complete with library sticker* and stamps.  The book is a real, complete novel.  Then, two people have written notes all over the margins of the novel, and those notes tell a story too.  As you read, you find another novel and at least one other story of two people who communicated more through books than they did directly.  AND there are codes.  And shadowy bad guys, maybe.  And a secret symbol, and a jerk of a professor, and a mystery about the author's identity.

I read the novel--Ship of Theseus--first.  It purports to have been written in the late 40s, in Czech, by one V. M. Straka--a mysterious recluse of an author.  It tells the bizarre tale of S., who has lost his memory and gets hijacked onto a derelict ship with mystery freaky sailors, when he really wants to go searching for a girl whose name might be Sola.  I was pleasantly surprised to find that the novel is readable and interesting.  Since I've been actually reading the writings of weird post-WWII Eastern European authors, I can tell you that while it's decent and weird, it's not as good and weird as the real thing.

After that you go through and read the notes, of which there are FOUR iterations, each color-coded so you have some chance of understanding what's going on.  They're still really confusing.  The novel has been left out at the university library, and Jen (a senior and a library clerk) starts writing notes to the owner, Eric (an expunged grad student and Straka scholar).  As they get to know each other through the notes they write, they try to solve the codes hidden in footnotes and figure out who Straka really was.  Somebody might be after them, though.

If you work really hard, you can figure out a lot about the mystery.  There are large websites devoted to this.  I gather that J. J. Abrams came up with the idea, Doug Dorst wrote it, and a team was required to design and sort out the details.  Abrams directed LOST, which I never watched, but I think I understand part of how fans felt about it.  There is no satisfying final resolution here.  You will have to work really hard to figure out more than the surface information.  And, for myself, I can't be bothered to work that hard.  The effort required is not worth the solution, for me.  I'm not even prepared to work quite that hard for Thomas Pynchon, and I'm a lot more willing to work for him.  It feels too designed.

It's very, very pretty.  It's reasonably fun to read.  But don't expect to just be able to finish it and feel satisfied; you might be bugged that there's this whole elaborate online THING you have to do if you want to understand anything.  It's also extremely ill-suited to libraries--there's so much stuff in the pages--so don't be surprised if your friendly neighborhood public library doesn't have it.


* The call number is 813.54, which is really American literature after 1945.  Right date, wrong country.  Czech literature after 1945 is 891.8685409, and yes, I looked it up (Slavic lit really gets the short end of the stick in Dewey).  And then there's the mystery about Straka's identity and citizenship, but I think a cataloging librarian would go with the original language of the book.
arty books books modern fiction mystery