The Street of Crocodiles 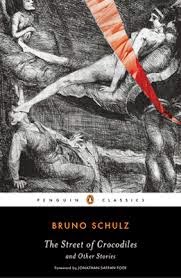 The Street of Crocodiles and Other Stories, by Bruno Schulz


I asked my daughters' violin teacher for recommendations.  He said this was his very favorite book, so I tried it.  And it is something else, man.  Whoa.

Bruno Schulz was a Polish Jew, shot by a Gestapo officer in about 1944, pretty much out of pique.  He had already stashed his pre-war writing and art with Gentile friends, and all of it disappeared, so that all that is left are these two collections of short stories, The Street of Crocodiles and Sanatorium Under the Sign of the Hourglass.  That is a literary tragedy, folks, because Bruno Schulz was a genius of bizarre writing.

These pieces are really strange, surreal, weird things. They are often dream-like, and always very very descriptive--positively lush with description--more like a painting than a story.  They are mostly domestic stories, about parents, relatives, or the neighborhood--his father most of all.   Insects feature largely, especially cockroaches and bedbugs.  People transform all the time--into scary birds, or strange animals, or inanimate objects, and then they magically reappear as normal...or not.

Here are some sample quotations for you:


In flats of that kind, wallpapers must be very weary and bored with the incessant changes in all the cadenzas of rhythm; no wonder that they are susceptible to distant, dangerous dreams. The essence of furniture is unstable, degenerate, and receptive to abnormal temptations: it is then that on this sick, tired, and wasted soil colorful and exuberant mildew can flourish in a fantastic growth, like a beautiful rash.

"Am I to conceal from you," he said in a low tone, "that my own brother, as a result of a long and incurable illness, has been gradually transformed into a bundle of rubber tubing, and that my poor cousin had to carry him day and night on his cushion..."

The salesgirls now walked up and down between the rows of books, their faces, like gray parchment, marked with the dark greasy pigment spots of brunettes, their shiny dark eyes shooting out sudden zigzag cockroachy looks.

It is, as usual in that district, a gray day, and the whole scene seems at times like a photograph in an illustrated magazine, so gray, so one-dimensional are the houses, the people, and the vehicles. Reality is as thin as paper and betrays with all its cracks its imitative character.

My father was the first to explain the secondary, derivative character of that late season, which is nothing other than the result of our climate having been poisoned by the miasmas exuded by degenerate specimens of baroque art crowded in our museums. 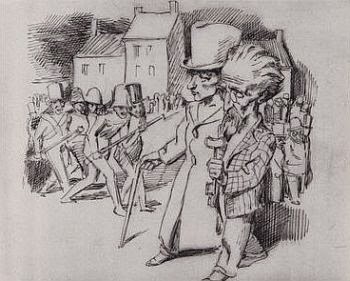 The second collection, Sanatorium Under the Sign of the Hourglass, is also illustrated by Schulz, who was an artist as well as a writer.  They're little pen illustrations, and reminded me somewhat of Maurice Sendak when he drew people (sketchy things, rather than illustrations).

If you are in the least interested in weird or surreal modern literature, Bruno Schulz is a must-read.  Kids who like Vonnegut would totally go for this guy, but he's a little bit more difficult.
Eastern European literature modern fiction Translation Challenge