Lost and Found in Russia 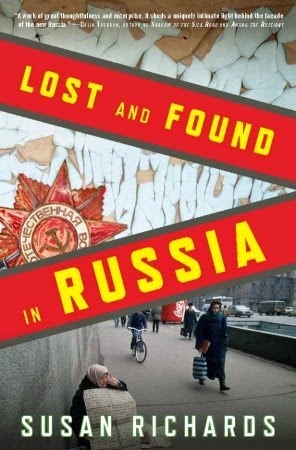 Lost and Found in Russia: Lives in a Post-Soviet Landscape, by Susan Richards

Susan Richards has been traveling regularly to Russia, writing about Russia, and trying to help people in Russia for quite a while now.  Here, she chronicles chapters from her visits over the past 20-odd years, ever since the fall of Communism.

Every section covers two or three years and begins with a short explanation of what was going on in Russia at the time.  (This is really helpful if you were in college in 1994 and missed much of Yeltsin's decline through lack of TV or news.)   It goes from 1992-2008, so there's a lot of stuff happening--the book is only about 300 pages long, but they are dense.  Richards visits several friends--often the same ones, so we can follow them over the years--and visits various spots to see what's going on.

Post-Soviet Russia, as described by Richards, is a difficult place to live.  Her friends cope in different ways; some are trying to run businesses while avoiding the thugs taking over everything, another joins an odd religious movement, and some try to actively fight the corruption, which is very dangerous indeed.  All the stories are gripping--and worrying.

This is one of those books I'm having a hard time describing, but it was really good.  If you're interested in Russia, read it.  Plus I learned some background for today's situation with Ukraine and the Crimea.