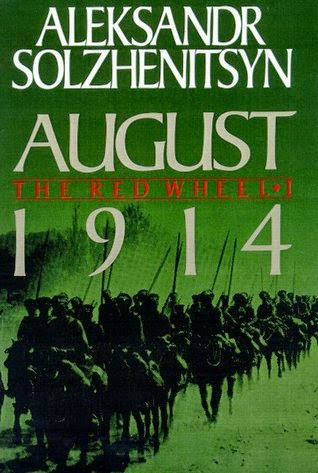 In January, I put this novel on my mental list for the year, thinking that it would be good for the 100th anniversary of WWI.  I hoped it would give me more insight into the Eastern front of the war, which I really know very little about.  August 1914 did do that, and although it's not my favorite Solzhenitsyn novel, it was very worth reading.

Like In the First Circle, this is a sketch of an entire society at a particular moment in time.  There is a vast cast of characters, all doing their own thing and sometimes intersecting with each other.  We do not only see the warfront; there are people on country estates, in the cities, in schools, and even chapters consisting entirely of snippets from newspapers.  But the vast majority of the novel does take place with the soldiers going to war.  We don't see nearly as much of all the other things.

Troop movements take up at least 2/3 of the book, and while I was interested, it was an awful lot.  Still, we get several perspectives: a general in charge of one wing of the attack, stymied by incompetent orders from above, peasants who have joined up, and a student who is desperate not to die in this stupid capitalist war when he could be dying for the cause of the revolution!

The entire novel showcases the dreadful, disastrous incompetence of the Russian government and military.  I'm actually reading up on the background to that now in Tuchman's Guns of August, so I'll know more soon, but it seems that the men in charge of the Russian army placed their confidence in sheer overwhelming numbers, plus the endurance and "guts" of the soldiers, plus the natural supremacy of the commanding aristocracy.  They saw no need to plan for supplies like food and ammunition (bayonets being superior anyway).  Technology that was primitive in other countries' forces was barely embryonic in the Russian military, so communications were impossible.  All they needed was faith in God and the Tsar, and victory would follow.  It's awful to read about the incredible mess that ensued.
chunksters classics Russian literature World War I