The Romance of Tristan 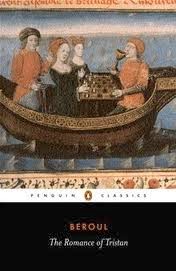 The Romance of Tristan, by Beroul

Beroul's Romance of Tristan is a very early version composed around the middle of the 12th century in French verse.  We only have part of it; the extant fragment starts well into Tristan and Yseut's affair and breaks off just before the episode of their deaths.  My translation is in prose and includes summaries of the action before and after the fragment.

Everybody knows the story of Tristan and Yseut, right, so I'm just going to talk about what interested me about this version.  Beroul is very careful to note that the potion is to blame for their irresistible passion for one another.  This potion is efficacious for exactly 3 years to the minute, and as soon as it wears off, they end their affair.  The whole time it's going on, Yseut employs tricks to convince her husband that she is faithful to him--which she is not--and yet this is considered completely justified.  I can't quite tell if it's supposed to be justified because it's all the potion's fault and therefore not "real," or if Yseut is supposed to be really sort of married to Tristan, since he was her first love.  Maybe both.  Later on, they renew their affair and that too is considered justified, so I think it might be both.

Other versions are longer and more elaborate, and I will probably read one later in the year.  I have the prose Romance of Tristan and Gottfried von Strassburg's German Tristan, so there's plenty to chew on.  Right now I'm enjoying The Quest of the Holy Grail, which is fantastic, and after that I have the German Parzifal, which I'm quite excited about.  Oh!  And over the weekend, I picked up a library discard of the 2-volume Everyman edition of Malory to replace my awful old paperback with its small, blobby type.  The library binding is quite hideous but will last forever.  I got the York Cycle of Mystery Plays too!
Arthurian Challenge medieval