The History of the Ancient World 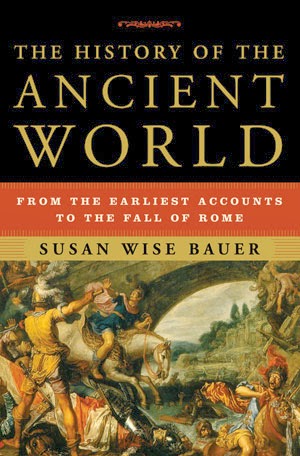 The History of the Ancient World:  From the Earliest Accounts to the Fall of Rome, by Susan Wise Bauer

I read this when it was first published several years ago, and I decided to read it again this year because I wanted to see if it would work for my older daughter to use for history next year (and can I just say that high school is coming at me like a freight train, eek!).  Fair disclaimer: Susan Wise Bauer, the author, is my homeschooling guru and can (almost) do no wrong in my mind.  If I get around to writing one of those Top Ten Influential Books Of My Life lists people are doing right now, The Well-Trained Mind will have to be pretty near the top.  In fact you can see the story of that here.

I had not remembered how enjoyable this book is.  I had a lot of fun with it, as well as the part where I re-learned lots of ancient history.  It took ages to get through, because it's 800 pages of dense non-fiction, but I was surprised at how easy it was to gulp down 50 pages at a sitting.

This is a survey of recorded human history from a birds'-eye view, from the earliest Sumerian records until Constantine's conversion to Christianity.  (Which is not the fall of Rome, as the title says, but she didn't pick the title--blame Norton.)  SWB works mostly chronologically, skipping around from Mesopotamia to China to Italy.  Very often you feel like she is starting new chapters with "Meanwhile, on the other side of the world..."  She mostly--not always--only puts in societies that are mentioned in texts; seeing archaeological evidence as archaeology and not so much history, she says little about groups until they show up in records with a story attached.  So new groups pop up all the time, as they run into record-keeping peoples or start writing themselves.

It's all very interesting, and she puts in lots of little stories to keep some personal perspective; it's not all grand movements of armies.  But this is big-picture history that works well as a background or primer for further reading.  SWB uses the myths and legends of each society to explain elements of their worries and hopes, which is neat.

I think it's a good history.  My daughter has been peeking at it and is now looking forward to using it as a spine for history next year.  There is a study guide; it's not exactly thrilling, but it's solid.  I will need to figure out a time to require a short research paper.  (The other day at work I tried to help a guy who has never written a research paper in his life.  He had tried to develop a thesis, but it was incomprehensible and he didn't really know what he meant by it.  I pointed him to excellent resources, including a step-by-step tutorial of how to write a paper and a whole slew of 'current topics' ideas; I sure hope it works.)  Oh.  Sorry.  Anyway, I enjoyed it and now I'm looking forward to reading her history of the "Renaissance World"...which is chock-full of death and disease.