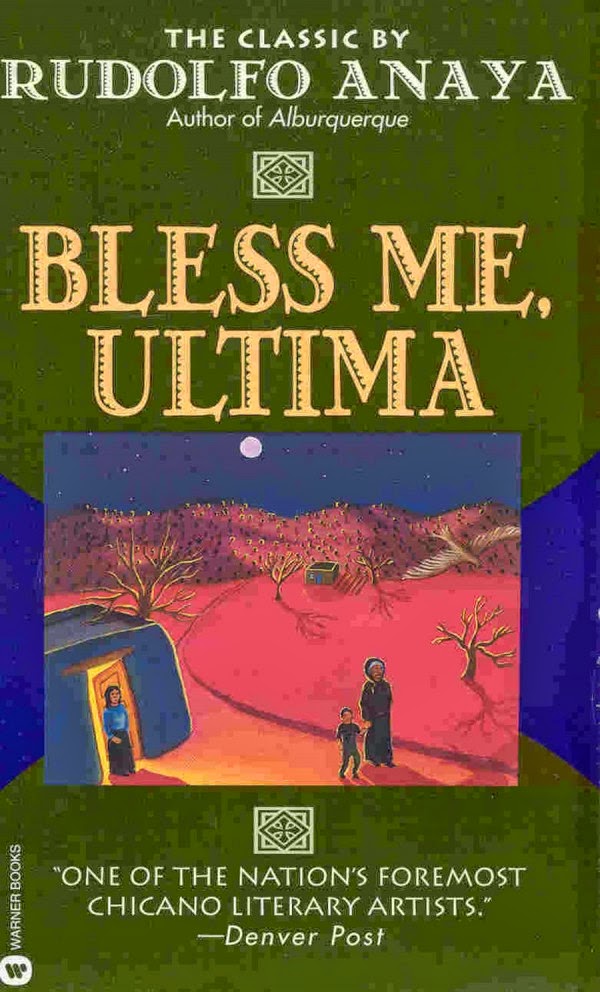 Bless Me, Ultima, by Rudolfo Anaya

Way back in college I had to take a course on modern American literature, which I was quite annoyed about at the time, but turned out to be a good thing because I found out that there were lots of books I liked after all.  One of our titles was Bless Me, Ultima, and at that time I enjoyed it.  I decided to put it on my Classics Club list as a re-read to see if I would like it again.

Antonio is a small boy torn between loyalties.  His mother wants him to be a priest and like her family, the quiet, earth-connected Lunas; his father wants him to follow the independent and wild Márez ways.  He loves the church but is drawn to the hints of older animistic beliefs he sees around him and wonders if the golden carp in the river might be a better god to follow.  As Antonio starts to grow up and witness the tragedies that happen in his town, he depends on his special relationship with Ultima, the curandera, for stability and comfort. Ultima seems to be the only person who might know how to resolve all these tensions and help Antonio know what to do.

My verdict?  Although I enjoyed several things about the novel, I think I liked it better the first time.  This time around I got very tired of the small-boy antics of Antonio's friends, which are described in loving (if gross and tiring) detail.  Antonio himself struck me as oddly mature, intelligent, and introspective for a little boy--not that I haven't known some real-life boys who were intelligent and introspective (I have!)--but it was laid on awfully thick.  Antonio is presented as a visionary, almost like a child in a medieval story of a martyred saint.  I'm sure that was on purpose, but it was a bit much for me.

I also get impatient with stories that present old pagan beliefs as kinder and gentler than Christianity.  The golden carp is described as punishing those who don't act the way he wants, especially anyone who fishes for carp, so I'm not sure why Antonio thinks he's all that nice and will fix everything.  While Antonio is worried about which system to choose, Ultima says they are all one anyway.  She is presented as a good Christian, but that is secondary to her powers as a good witch that come from her knowledge of nature.  There is evil as well in the three malevolent witches in town; Ultima defeats them, but at the cost of her own life.