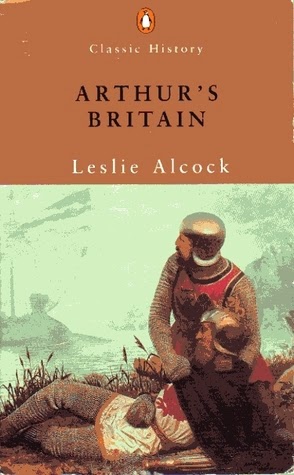 Alcock wrote one of the really definitive books of "Who was the real Arthur?" back in 1971, and he was well qualified to do so after excavating Cadbury Castle.  It's now a Penguin "Classic History" title, but since it's also 40 years out of date, I wouldn't recommend it for up-to-the-minute accuracy.  Overall, though, it's probably reasonable enough.  It's a portrait of 5th-century Britain, focused on the archaeological and textual evidence--what there is of it.

The first 100 pages delve into the historical texts that mention Arthur: Nennius, Gildas, all our old friends.  From these, Alcock concludes (after a lot of detail and argument) that Arthur would have been a famous warrior, but not a king, and a Christian.  Some of the sources, he notes, refer to Arthur as a pretty awful guy, and others show him very devout (of course it could easily be both!).  Eminent warriors drew stories to themselves and became legends, even fairly soon after their lifetimes.

Then we spend a really long time on pottery, and more time on other evidence.

Finally Alcock spends a very interesting 100 pages on warfare, economics, and other material about the lives on ancient Britons.  Hardly any of this stuff has anything to do with Arthur; it's (as advertised) a book about Britain as a whole.

By now there are probably more enthralling books about 5th century Britain than this--though Alcock is a thorough and careful researcher, unlike many pop-history authors; it's just that no one but an archaeologist wants to read that much about pottery.
Arthurian Challenge history TBR challenge