The Sound of the Mountain 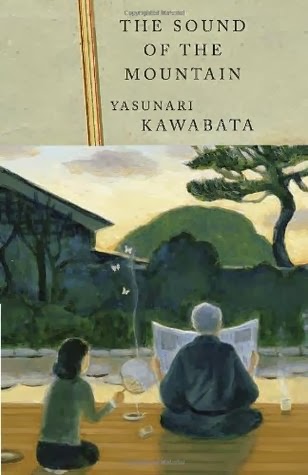 The Sound of the Mountain, by Yasunari Kawabata


Kawabata first became famous in the West for his short stories and two short novels.  He won the 1968 Nobel Prize for literature.  This novel was published in 1949, but not in English until after the Nobel Prize.  My book blurb lauds it as "one of his most important works--both longer and more complex" than his other novels.  The Sound of the Mountain describes the inner life of an elderly businessman named Shingo, who observes his dysfunctional family and his own old age.  His childrens' marriages are foundering, he is more fond of his daughter-in-law than of his own daughter, he is distant from his wife, and his most intense feelings seem to be reserved for flowers and art.

I honestly did not care about this book, or the people in it, or anything much.  I planned to like it.  I expected to like it.  At the beginning I was rather tickled to see that Shingo lives in Kamakura, where my mom lived for several years just after this story was published in Japan.  But I was underwhelmed, which made it difficult to want to read.  Brona took up this dare at the same time, and she also didn't really care for it, so at least I'm not the only one and I don't have to worry that I'm a total philistine.


This was the first Classics Club Dare book, and reading it gives me the right to give you a literary dare.  Should you choose to accept it, I challenge you to read Brideshead Revisited, by Evelyn Waugh.  I have never read it myself, nor any other Waugh, but I would like to read it this year.