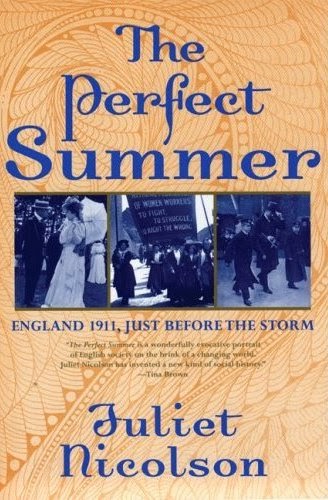 The Perfect Summer: England 1911, Just Before the Storm, by Juliet Nicolson

This year I'm trying out a new thing for me--a sort of book club on Goodreads that reads a bunch of books centered around a theme and then discusses them.  It will just happen twice in a year.  Our first batch of books are all about World War I, which is of course very appropriate for the 100th anniversary this year.  The Perfect Summer is the only non-fiction title on the list, and it's really more of a look at the English society that is about to disappear forever.

The summer of 1911 was unusually warm and sunny, and before too long it turned frighteningly hot and dry.  In this heat wave, George V was crowned King (and Queen Mary felt trapped).  Wealthy socialites attended endless parties, trying to stave off ennui with the help of drink and adultery.  Poor workers, fed up with horrific conditions, staged strikes and shut down London. The Russian ballet electrified everyone who saw it, poets lounged in country gardens to write, and Diana Manners was the golden girl of the season.

It's an excellent piece of social history, painting a portrait of English society at one particular point in time--a period of just four months.  There are some really interesting personalities, and quite a few who make you wonder what anyone saw in them.  You will read of some of the most infuriatingly useless people who ever lived, and of people whose whole lives consisted of dangerous work for little pay.  (It's no wonder communism got to be so popular.)

I enjoyed Nicolson's history very much, and thought it a great way to start the reading about World War I that I have planned for this year.  Besides the novels that are assigned for the book group, I'm planning to re-read Barbara Tuchman's classic history The Guns of August and possibly Solzhenitsyn's novel August 1914, and I'm very tempted to read a book I just found at the library, The War That Ended Peace.
history World War I