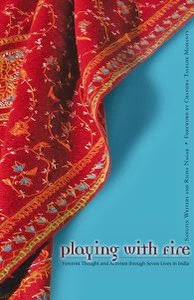 Playing With Fire: Feminist Thought and Activism Through Seven Lives in India, by the Sangtin Writers and Richa Nagar

Uttar Pradesh is one of the most poverty-stricken areas of India, and there are many NGOs there trying to make a difference.  Some focus on people of the lowest castes.  One such NGO encouraged these women to form their own small group, which they called Sangtin.  As they met over years and told their stories to each other, they decided to write down their experiences and publish a book, and here it is.  It was originally published in Hindi and garnered a very strong reaction; in fact officers of the NGO concerned took great offense and there was something of a kerfuffle.  The book is here translated into English, bookended with explanatory chapters at either end.

The introductory chapter is really quite academic in tone and even rather off-putting with its jargon, but it boils down to explaining that these seven women tried very hard for complete honesty with each other as they worked together.  Since they are of different backgrounds, castes, and life circumstances, and all of them have had very difficult lives, this could be extremely painful, but they put it all into writing and published it.

The book itself is gripping.  Each woman remembers her childhood, home, her marriage and the birth of children, all the events of her life.  Some are Dalits, one is a Muslim, all are varying levels of really poor.  I think only one got a say in who she married.  One had a child taken away.  Each also talks about how she became a field worker for the NGO, and the effect that has had on her life and her family--especially the difficulties, in a highly stratified society, of learning to work with and love people from other faiths or castes.  All of them were strictly taught never to eat food from another, contaminated household, and even after years, not all of them can do it.  They also critique NGOs and Western research into their society.

One thing that was wonderful about the writing was that it was clearly translated directly from Hindi.  It is very, very Indian in tone, which really brings the reader in to their world.  This was easily my favorite thing about the book.

The final chapter explains the uproar that ensued after the Hindi book was published in 2004.  It was kind of ugly.  Again, this chapter is pretty academic and laden with jargon.  The 'bookend' chapters are written in English by the professor who met with the group, instead of by the seven women who wrote their personal experiences in Hindi, so that is why there is such a difference.  I much preferred the meat of the book, but the explanations are important to understand what it is.

A great book to read if you are interested in life in India and how it is changing (or not, or changing very slowly).