Week 22: The Rising of the Moon 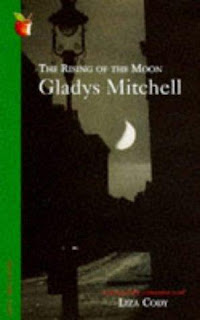 The Rising of the Moon, by Gladys Mitchell

Gladys Mitchell was quite a well-known mystery novelist in her day, but she isn't really very popular any more, probably largely because her detective was not really all that attractive. Mrs. Bradley is an intelligent psychologist (back when psychologists were a rare and strange breed) and good at solving crimes, but she's kind of caustic, frequently described as cackling with laughter or poking people in the ribs with her umbrella.

The Rising of the Moon is a neat story because it's narrated (in retrospect) by a 13-year-old boy. He and his younger brother carry out much of the action. They mystery revolves around several young women who are horribly killed--but only during the 3 days when the moon is at its fullest. It's quite a good read (although I was irritated when Mitchell made the full moon rise whenever it suited her, at 11pm for example) and if you're a British mystery fan, put it on your list.
52 books