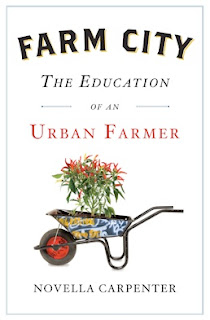 I guess I just can't get enough books about gardening. This one is about a hipster type who moves to inner-city Oakland and starts a tiny little farm on an empty lot that she doesn't own (though apparently she has since purchased the land). She plants veggies, puts in a few trees, gets bees, poultry, and bunnies, and even raises two pigs.

Carpenter is mostly pretty interesting as she chronicles her urban garden. She spends a lot of time dumpster-diving for rabbit and pig food, which I approve of. She manages to hold off on the smugness pretty admirably, though she ticked me off in the introduction by calling Berkeley "plush" (yes, bits of it are--so are bits of Oakland). And towards the end she gets kind of aggravating, but I guess she can do that. Oh, and she's utterly turned off when she goes to buy something and suspects that the woman might be...(horrors) a Republican. "Not my kind of people."

I was pretty impressed with what she managed to accomplish, and also at the sheer cluelessness of some of her ideas. The pigs are the biggest example: she buys two young pigs and then finds out that pig poop smells terrible. Who doesn't know that?? She is really unprepared for the pigs and just keeps shoveling in more straw to cover the smell (somewhat unsuccessfully).

It's worth reading, and I do approve of urban gardening. Even if she's a little too eager to establish her hipster cred.
52 books