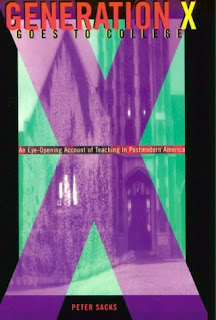 Generation X Goes to College: an Eye-Opening Account of Teaching in Postmodern America, by Peter Sacks

Peter Sacks was a news journalist, but when he moved to the Pacific Northwest in the early 90's, it was hard to find a job. So he applied to teach journalism at a community college. He soon realized that he had no idea how to teach college courses, especially not to Generation X 18-year-olds, whom he found puzzlingly disengaged and entitled. This book is his attempt to understand and explain both Xers and the problems that plague the higher education system. So it's 20 years out of date now, but there were some things to think about.

It was an interesting book to read, because I was in college at the time that he was teaching; I'm one of the Xers he complains about. He says that his students are disengaged, rude, lazy, illiterate, and expect to be given lots of credit for trying hard, no matter how bad the result is. They feel entitled to easy As and want to be entertained all the time, not challenged to think. I don't think I was that bad a student, but I went to a college with a different culture. And if we were the slacker generation, I think we've had that well beaten out of us by now!

One interesting thing he complains about is the Generation X distrust in authority. People comment on this all the time, so I gather that it's considered to be a wide-spread characteristic of Xers--an unwillingness to trust authority and institutions, a feeling that an institution has to prove its worth, and a willingness to walk away and find a different solution if we're not satisfied.* People my age do not assume that the schools are going to do the best thing for our kids now, and I guess 20 years ago we didn't always assume that our professors knew best. This drives Sacks crazy, but I fail to see why I should trust an institution that can't show me a good track record (even though I think, of course, that students should be respectful of a professor). It's been (painfully) proved to us too often that trust is often misplaced, I suppose. To me, unquestioning trust in authority is naive and stupid, and I suspect that Sacks would agree as long as it's not his authority that isn't being trusted. It's not like he trusts the administration of his college; he has a lot of criticism for them.

At the same time, I'm currently working at a community college, and people now complain about exactly the same things Sacks complains about, only much more so. The disengagement has only intensified, only now students bring their own entertainment in the form of texting and Internet-surfing on laptops. This, and general illiteracy, is something I worry about. But maybe we're all doing a lot of hand-wringing over something that cures itself in time; Xers managed to grow up and I suppose this generation will too. I expect that Sacks' own professors often complained about the lazy, entitled students of 40 years ago. So, actually this book made me feel better about the future!

*For example, this article talks about how to market schools to X parents, and its descriptions of us are pretty accurate.
52 books