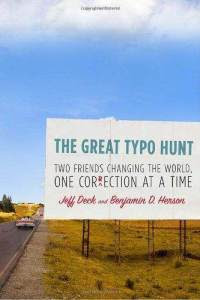 The Great Typo Hunt: Two Friends Changing the World, One Correction at a Time, by Jeff Deck and Benjamin D. Herson

Jeff wants to change the world and make a mark. But what can he do? He is a lowly magazine editor/writer. Aha--he can travel the country, fixing the tide of typos that plagues the land! Armed with Sharpies, chalk, white-out ("Elixir of correction") and dry-erase markers, Jeff and whatever hapless friends he can convince to come along set out to fix the world. Naturally, they maintained a blog too (the link above).

It's a reasonably entertaining book, somewhat too heavy on the personal meditation. I was ready to quit reading near the end, but it got much more exciting when he was dragged into court on a charge of vandalism--he had unwittingly fixed a historic sign at the Grand Canyon.

Jeff did not, surprisingly, do this project for a year and then write about it. It only took about 3 months, plus aftermath. But it's pretty much the same genre. 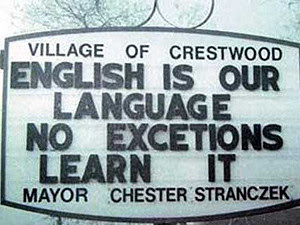