Week 19: The Intellectual Life of the British Working Classes 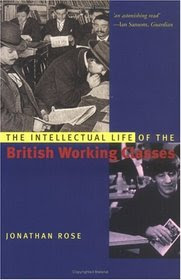 The Intellectual Life of the British Working Classes, by Jonathan Rose

Jonathan Rose chronicles 150 years of working-class striving for education in this giant (but excellent) tome. In the early 19th century, it became possible to get books cheaply, and thousands of working people spent their time reading, attending clubs that encouraged education, and generally absorbing as much culture as they could get their hands on. Education was the path to freedom and equality, as well as leisure enjoyment and fuel for the mind. It's impressive to find out what people read and enjoyed; many of them seem to have loved authors that I find very difficult, such as Milton and Carlyle and so on. I guess that shows the awful effect of TV and the Internet.

I particularly enjoyed the last couple of chapters, which covered the Edwardian period up to World War II and focused on the intelligentsia's opposition to working-class self-education. Modern authors such as Eliot, Forster, and Woolf exuded snobbish horror at the efforts of ordinary people, calling them 'half-educated,' 'middle-brow,' and (oh no) 'suburban.' All those literary jeremiads about the grey, faceless masses in the suburbs and cities, and the hopelessly clumsy and awkward characters like Howard's End's Leonard Bast--those are more cariacture than reality, more snobbish stereotyping than anything else. (So next time you hear a lament about soulless suburbia, remember that you're hearing an echo from people who thought that only certain elites had a right to good education and the life of the mind.)

I really liked Rose's history and would recommend it to anyone willing to spend a lot of time on it, since it's not a light read. Also, this book did not actually put me in a sympathetic mood for my next feminist classic: A Room of One's Own by Virginia Woolf.