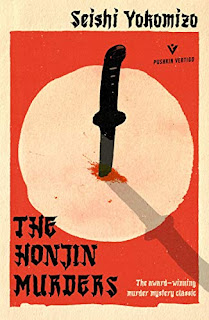 The Honjin Murders, by Seishi Yokomoto

Winter 1937: in a small village, the well-off and proud Ichiyanagi family is preparing for a wedding.  The eldest son of the house, Kenzo, is finally getting married to a lovely girl, but the family is disapproving, because of her ordinary family background.  The Ichiyanagi family is intensely proud of their family history; they once owned a honjin, an inn for officials.  The day before the wedding, a strange man, wearing a mask over part of his face (much like a modern covid mask!), has been asking questions.

The newlywed couple is spending their wedding night in a small annexe house, away from the main family compound.  In the middle of the night, strange sounds and screams are heard -- and then silence.  The house is locked up tight, and the family has to break down a shutter to get it, but then they find husband and wife, gruesomely murdered.  Outside, a blood-covered katana sword stands, point-down in the snow.

The police call in some outside help -- the young amateur detective, Kosuke Kindaichi.  He recognizes that this murder is a classic 'locked room' mystery, probably set up in imitation of the popular English mystery novels.  The clues seem to lead to an old enemy of Kinzo's, a three-fingered man, but only Kindaichi is clever enough to unravel this case.

This is the first in the classic Japanese mystery series focused on Kindaichi, who is described as incredibly scruffy and unkempt, with a habit of scratching his over-long, wild hair and grinning as he comes up with ideas.  Sort of a Japanese Columbo, perhaps?  Except it would be Columbo who copied Kindaichi, since this series started in 1946 -- but this is the first time it's been translated into English.

This was a well-plotted and intricate mystery that I've been wanting to read for a long time.  I enjoyed it and would really like to read the next one, too -- The Inugami Curse.