In the morning, we went to one of Ludwig II's earlier palaces, Linderhof, situated in the countryside where the royal family had a hunting lodge.  It's an absolutely lovely area and I wish I could take walks around there!  Linderhof is a compact little place modelled on Versailles, which Ludwig greatly admired.  I've never been to Versailles (or France, for that matter) so I cannot compare.  The rooms were not large, but they were certainly heavily gilded!  Every room had more rococo gilt, and painted scenes, and sculpture, and porcelain, than you would think would be possible.  The bedroom had a huge chandelier more suited to a ballroom, and there was a room of mirrors that made me a bit dizzy.  Oddly, little porcelain vases were often placed on small outcroppings in the gilded swirls on the walls - all different.  Another interesting feature in a couple of the rooms was that the ceiling paintings went for a three-dimensional effect, with a few legs and draperies modelled in plaster coming down out of the painting. 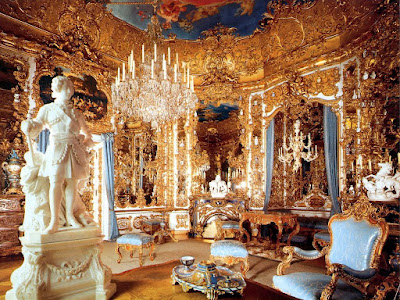 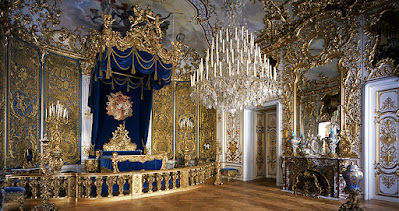 The gardens were easier to deal with.  They were all formal and French, with pools and fountains, staircases and urns and statues.  The main fountain is sort of like Old Faithful; the water comes down from a hill and fires it off every so often, making a terrific show since the water shoots as high as the hill is, and then gradually goes down until it stops.  In back, another set of stepped pools come down the hill and end with a fountain portraying a chariot with horses -- and the water comes out of their nostrils! 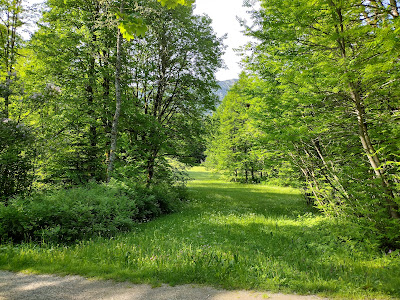 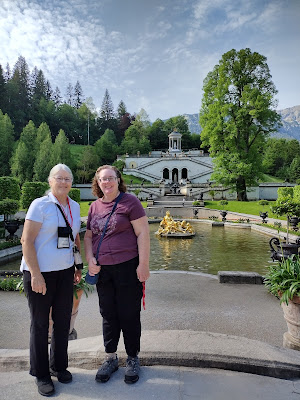 After that we traveled to Oberammergau, which is a beautiful little town even when it's not inundated with playgoers.  They've made woodcarving a specialty, especially (but not only) Nativity sets, since of course anyone who goes to the Passion play would probably like a Nativity set from the place too.  We went into several shops, each larger and more lavish than the last.  They must supply many churches as well; there were lots of large statues that you'd expect to see in a church.

We went into a little bakery for lunch and had a blessedly simple meal with a yummy pastry for dessert before wandering around town some more.  Oberammergau is sort of a concentrated version of Bavaria -- instead of some buildings being painted with attractive frescoes (a style I really like), they nearly all are.  It was a very warm day and we got some ice cream (at a very crowded ice cream shop) before going to the actual theater. 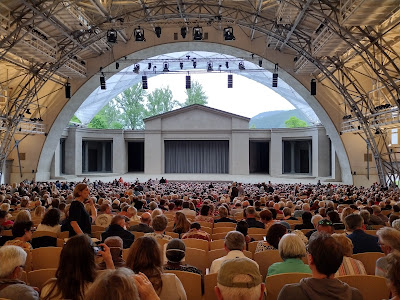 The theater is huge, able to hold over 4000 people.  It's partly open to the air, with a cover over the audience but an open space before the stage area -- very practical for the changeable weather.  Of course, they use the theater for lots of productions, but it's designed to handle the huge crowds.  In a play year, there are performances 4 times a week from May through October.  Phew.  The theater was first built around 1900; before that, the play was performed near the graveyard, but as more and more people started coming, they needed a theater.  It's now a very modern place with excellent technology -- it may be a village production, but you would never know.  It's completely professional.

The play itself is very long and goes in two parts, from 2-5pm and then 8-11.  It's in German, of course, and there are copies of the script in English so you can follow the events.  Over the years, it's been rewritten and updated --- they call it a living play, not a historical artifact.  It covers, approximately, the last week of the life of Christ, with lots of dialogue and argument added to the Biblical account.  (We kind of thought an hour could be cut without too much trouble.)  It's not just a straightforward play, though.  It's also an oratorio!  A choir and soloists, representing the original 17th century villagers, sing a commentary between scenes.  This parts are illustrated with living tableaux illustrating scenes from the Old Testament that are compared to the events in the play. So there's a lot.

In this version, Judas is represented as wishing to push Jesus into a confrontation with the Sanhedrin and the Romans, so that he'll just have to take on his role as the Messiah and overthrow the oppressors of the people.  The various leaders -- the Sanhedrin, Herod, and Pilate -- all want Jesus to go away and stop making trouble, but nobody wants the responsibility of actually killing him, so they keep trying to push the job onto somebody else.  The crucifixion is graphically represented, but, oddly, the play almost ends there.  An angel announces the Resurrection to Mary Magdalene, there is singing, and that's the end.  No resurrected Christ appears, and we discussed that quite a bit.  It made it fall a bit flat, we felt.

By the time we got to our hotel, it was midnight.  This was the place we would be staying for the remaining 5 days of the trip, and it was a really nice, comfortable pension in Ruhpolding, a small town that is fairly central to the various other places we wanted to go.