On day 2 we started off pretty slow, because we were waiting for more of the group to join un.  At 7am the breakfast opened, and we had the greatest breakfast of our entire lives.  Amazing croissants, 6 fabulous kinds of bread, 4 honeys, 6 jams, cheeses and wursts and fruit/veggies galore.  And an entire muesli bar -- I love muesli and will happily eat it for days with plain yogurt.  But then we just had to sit around for a while and wait for the bus to arrive.

We drove to Dachau, a suburb of München that housed the first concentration camp, which is now a memorial site.   Dachau started with regular criminals and political prisoners -- just whoever the Nazis didn't like, especially Communists -- and expanded to Jews, Roma, and religious objectors. There's a gatehouse with "Arbeit Macht Frei" over the gate, and the main building still exists, as well as the prison block.  The prison is very long and has innumerable cells, including 'standing' cells and 'special' cells for people like Martin Niemoller.  The main building is a huge bracket shape and held the initial processing room and plenty else.  It's now filled with exhibits of propaganda and history.  There is a huge empty yard for roll call, and then a massive area that was filled with barracks.  Those are all gone but the cement foundations remain, and there are two replica barracks with examples of different kinds of bunks, which got progressively more crowded, and a tiny bathroom area that was totally inadequate for the hundreds trying to use it.
Like many of the places on our tour, it would have been nice to stay longer and see more detail.  There were several exhibits we couldn't get to.

For the greatest contrast possible, we then went to Nymphenburg, a summer palace for the Bavarian royal family with a huge, long building around a garden and ponds with swans.  We entered the most ridiculous room I had ever seen up to that point, every inch covered with gilt curlicues and sculpture and paintings of cherubs.  It's enough to make you a Communist; I don't know why the Bavarian people liked their royals so much.  One bedroom had a hilarious ceiling painting of Thetis, the sea goddess, with kelp in her hair, pearls and coral.  All very sumptuous, and I was happy to see a much calmer 'Chinese cabinet' with panels painted with pretty little scenes.  On the other side, there were some offices and Ludwig I's 'gallery of beauties' -- portraits of various lovely women.  One was the famous portrait of Lola Montez, an Irish adventuress who figured being from Spain was more interesting.  She became his mistress -- to the city's horror -- and eventually had to be banished, whereupon she made her fortune in America with her romantic story and famous Spider Dance.*  We walked around some, and there's a nice foresty area with a cute little 'witches' house' and playground.  Then it was time to go. 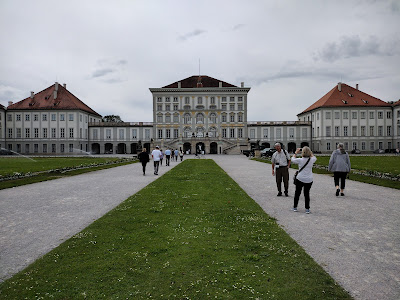 We had a two-hour drive to Wieskirche, most of which I slept through (a recurring theme; we'd be driving through fabulous scenery and I'd sleep through it all).  We drove through the south Bavarian hills, just lovely country filled with well-kept farms and hunting-themed lodges and ski trails.  Wieskirche is a very rococo church in the middle of nowhere, built in honor of a miracle in the 1700s when a figure of Christ is supposed to have shed tears.  The figure is now in the center of the altarpiece and surrounded by lavish decoration.  On the sides are pictures sent by people in thanks for healthy babies and so on.   It was very lovely.  By the time we got out, the kiosk was closed and there was no bathroom or drinks to be had.  We drove to our hotel, less than half an hour. 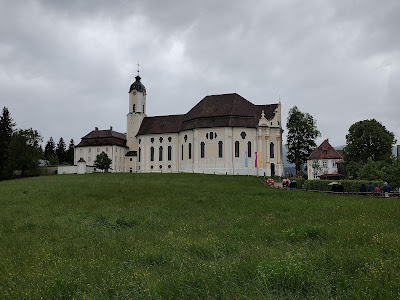 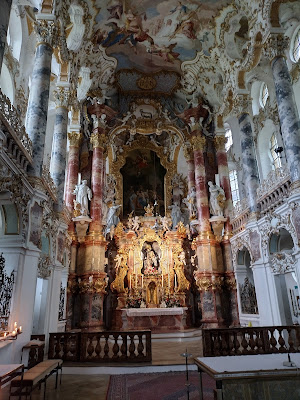 The hotel was great.  We each had a balcony, looking into the garden, and window boxes of pink geraniums.  Everybody had those window boxes, and the really neat part is that it rains a bit pretty much every day; you don't have to water anything.  There is just water everywhere.  We had a long, very late 'light' dinner of salad, fish, vegetables/potatoes, and schnitzel.  We sat with two couples, one who works in London, working with making connections with diplomats and such from all over the world, and one where the lady was an exchange student in Denmark too, ten years before I was!  We had a fun time discussing our trips and talking some Danish.
*For more on Lola Montez, check out my mom's blog posts!
Germany trip