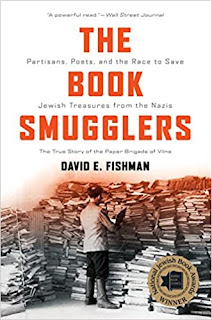 The Book Smugglers: Partisans, Poets, and the Race to Save Jewish Treasures From the Nazis: The True Story of the Paper Brigade of Vilna, by David E. Fishman

Vilna, in Lithuania, was once "the Jerusalem of Europe" -- the intellectual and cultural hub of European Judaism.   The Nazis tried to destroy it -- not entirely successfully -- and the Soviets just about finished the job.  Fishman gives us a detailed and fascinating history of the Jewish writers, rabbis, and librarians who generated and took care of the books and cultural materials and were then forced to cull through them and decide what should be shipped out and what should be destroyed.

Fishman gives us an entire cast of characters, most memorably a duo of poets, Shmerke and Sutzkever, situated in a detailed context of pre-war Vilna.  Communism, fascism, and Zionism are all in the air.  At invasion, the Nazis establish two small ghettos for Vilna's large Jewish population, and choose workers to sort the invaluable library collections (in Yiddish and Hebrew, so only Jews could do the work).  A certain percentage was to be shipped to Germany to become part of a planned library of Judaism, so that future intellectuals could study what had been destroyed.  Most was simply to be scrapped.

The workers agreed to smuggle particularly important texts and artifacts out of the libraries and into the ghetto, to be hidden in hopes of later retrieval.  They contrived several different hiding spots, mostly underground, and secreted an amazing amount.  They also argued over whether precious documents would be safer in Germany or in hiding.

Eventually the ghettos were cleared.  Nearly everyone was killed, but a few survived to come back and search for the hidden papers.  This only takes us to halfway through the book, because Shmerke and Sutzkever teamed up to collect those retrieved documents into a cultural collection in the new Soviet-controlled Lithuania.  But the Soviet bureaucrats, while willing to fund many cultural collections, had no interest in Judaism.  It took Shmerke quite a while to realize that, having saved these things from the Nazis, he was going to have to save them from the Communists too.

So it was back to work.  This time they wanted to send everything to New York City, to the new YIVO headquarters.  YIVO was the Institute for Jewish Research, an international organization which had been founded and centered in Vilna.  Many of the stolen books and documents had belonged to YIVO in the first place.  The duo had to smuggle things out carefully, and much was lost.  Shmerke also continually applied for the books sent to Germany to be released to YIVO, which was much harder to do than you'd think.  The American government was in charge of re-repatriating stolen cultural materials, and they were only dealing with countries, not organizations.  The Lithuanian Soviets didn't actually want the Jewish books, but they sure didn't want to let them get sent off to New York either.  Fortunately, a Lithuanian librarian made sure they survived, stored in a church basement for 40 years.

It's amazing that anything survived, and thinking about the amount lost is heartbreaking.  Fishman is constantly listing items (Sholem Aleichem's manuscripts!  Herman Kruk's ghetto diary!) that were saved at the last minute...or not.  Any book lover or person interested in Jewish history will want to read this history; it's fairly heavy-duty, but it's also excellent.

Fishman talks a lot about the Great Synagogue of Vilna and the surrounding libraries and shuls.  Of course, I wanted to look up the Great Synagogue and find out what it looked like, and what happened to it.  The building did survive the war in a ruined condition, but the Soviets demolished it and paved it over in the 1950s.  But!  Because the synagogue was built down, a surprising amount of archaeological evidence survived under that concrete cap.  I found this preview for a documentary about the whole story, which I gather won't be released for months yet, but I sure hope I can see it when it comes out.