A Civil Contract, by Georgette Heyer 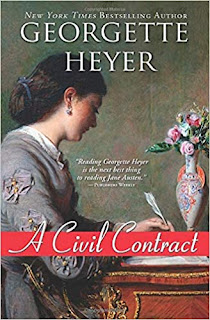 When I run into a Georgette Heyer novel I haven't read, I usually grab it and put it on the shelf for when I want a light, relaxing read.  I wasn't necessarily going to write a post about this story, but it turned out to be unusual for a Heyer Regency novel, and very interesting.

Captain Adam Deveril has been off fighting Napoleon in the Peninsular War, but upon the sudden death of his father, he becomes Viscount Lynton, owner of a landed estate and a truly astounding amount of debt.  His father, an optimist and big spender, has left everything neglected and heavily mortgaged too.  Adam needs to provide for his sisters and get his mother settled somewhere affordable, and it looks like he'll have to sell all of the family property to do it.  He and the enchanting Julia Oversley are madly in love, but their marriage is now out of the question.  Adam is left with a choice: he can sell everything (rendering his relatives miserable), or he can marry Jenny Chawleigh.  She's the daughter of a wealthy merchant, plain but practical and kind, and her ambitious father wants her to marry up.  Adam decides to sacrifice himself for the family -- partly to stop his little sister from trying to do it.

So Adam and Jenny marry.  Both are trying hard to navigate this marriage of convenience and be kind to each other.  Jenny sets out to be a comfortable and undemanding wife; she understands Adam's quirks, feeds him well, and never complains if he's late.  Adam chafes under the necessity of accepting money from a father-in-law who is very nice, but completely lacking in tact or taste.  How these two -- and their extended family and friends, even Julia -- find their places and fit their lives together makes for an enthralling tale that combines Heyer's comedy with more realism than is generally found in Regency romances.  It's more like domestic historical fiction than a standard romance.  Plus there's lots about Napoleon and other matters of the day.

I enjoyed it tremendously.  I always like a Heyer comedy, and was surprised to find this to be a little heavier and more realistic than usual, but that's an improvement to my mind.