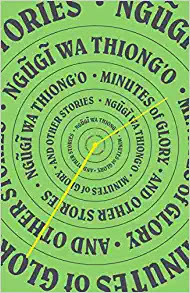 Minutes of Glory and Other Stories, by Ngũgĩ wa Thiong'o

I've wanted to read Ngũgĩ wa Thiong'o for a long time, but when I tried A Grain of Wheat, I just couldn't get into it.  I ran into this short story collection and thought that would be a great way to try him out.

This is a selected collection of short stories, originally published in 1975 but now put into a second edition with some new stories added.  So most of them are from much earlier in Ngũgĩ's career.  I really liked those early stories; the first three are grouped together as being about 'mothers and children,' so of course I liked those.    Some of the middle group ('fighters and martyrs') were up my alley too, though not all of them.  One, "The Martyr," reminded me of Isak Dinesen's Out of Africa -- if you told it from the other side.  (It's not that the stories are at all similar, and in fact I haven't read Out of Africa since 1994, so I don't remember much.)

The title story, "Minutes of Glory," is one of his most famous, and stems from a story he heard about a downtrodden barmaid who stole a lot of money and had one glorious day living the high life -- in the exact bar she worked in.  This really is a great story and if you're only going to read one, this is a good choice.  I also liked the next one, "Wedding at the Cross."

The new stories were not as enjoyable for me as the older ones.  I'm sure lots of people would love them, though!  This is a nice collection if, like me, you're looking to get started with Ngũgĩ.