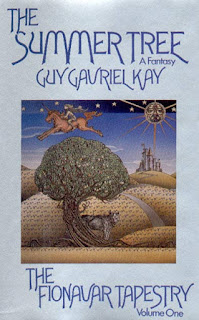 The Summer Tree: Book One of the Fionavar Tapestry, by Guy Gavriel Kay

Some time ago I found this trilogy on the donation table.  Having never heard of the Fionavar Tapestry, I was intrigued enough to take it home.  (Does that cover look like 1980 or what?  Though it was in fact published in 1984.)

So: five Toronto college students go to a lecture by a famous professor, who turns out to have another identity; he is Loren Silvercloak, a mage of Fionavar, and he's looking for some earthly guests to visit his world for the occasion of the High King of Brennin's 50th anniversary.  Sure, why not, they say, and so he whisks them off -- but Dave, who didn't really want to in the first place, jerks away in the middle of the transfer.  Four guests arrive in Brennin, and Dave is...somewhere around.

Fionavar, the original of all the worlds, is very Tolkienesque indeed, with touches of Frazer and Celtic mythology.  There are elves (lios alfar and svart alfar), Dwarves, maiar, valar and so on, plus some additions from the 70s: a Goddess cult of blood sacrifice,* and a surprising number of lovely young women eager to show the new guys some hospitality -- who never ever seem to worry about pregnancy or disease.

The four are promptly dragged into various adventures, instead of the two-week vacation they were promised.  Kevin and Paul accompany the prince (charming, usually drunk) on a hair-raising adventure.  Kim is recognized by Ysanne the Seer as her successor, and goes with her for training.  Jennifer goes on a picnic with elves and is captured by the enemy.  We eventually find Dave among a nomadic tribe.  And Paul, who lives with a terrible guilt, volunteers to go to the Summer Tree in place of the High King.

Although I thought it was a bit derivative, so was a lot of other high fantasy of the 80s, and it made pretty good reading.  I plan to continue through the rest of the trilogy.

*There are a few competing religions: the Goddess cult is older, the mages are into a more earth-based power, the Summer Tree has a god, and above all is the Weaver who controls everything.  So everybody uses a lot of textile-based imagery: they say "Brightly woven!" or talk about the Great Tapestry of which we are but a thread.  That sort of thing.