Summerbook #4: Are We Smart Enough to Know How Smart Animals Are? 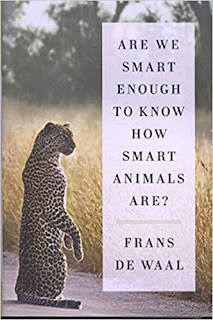 Are We Smart Enough to Know How Smart Animals Are? by Frans de Waal

For most of the 20th century, Western scientists stubbornly denied the possibility that animals could have anything approaching consciousness or intelligence.  Surely they could not truly learn, have memories, make deductions or plans, or have real social networks.  Anything that looked like that must really be instinct, blind chance, or in the behaviorist category of learning to do a simple action for an immediate reward.  There was a distinct demarcation between human and animal, and humans have something that animals never have.

Well, Frans de Waal is here to tell you all about what he thinks of that nonsense.  After decades of working with animals and studying their intelligences, he has collected lots of research from many biologists, and he's going to teach you about animal cognition -- which we're only getting started with.

It makes sense that if you're going to test an animal's intelligence, you need to give it a test it can comprehend and carry out.  De Waal is scathing about early tests that seemed designed more to confirm pre-existing beliefs than to actually test very much: tests in which chimps were asked to differentiate between human faces instead of chimpy ones, tests that gave elephants mirrors that reflected only their legs.  There was also a lot of focus on teaching language to primates, which does sort of work, but also doesn't take into account what they actually want to do.

It turns out that critters are constantly surprising biologists with what they can do, and cognition seems to work on a spectrum, instead of humans being completely separate from the rest of the animal world.  De Waal regales us with story after story of animal ingenuity and learning that we can't yet comprehend.  (How do you understand how a dog sees the world, much less an octopus?)  It's fascinating and a lot of fun.

Unfortunately, before I wrote this post, I started reading Mom Genes -- another great book featuring a lot of chimps and animal observations -- and now they're kind of mixed up in my mind.  But this one is very readable and interesting, filled with good stuff, and I highly recommend it.