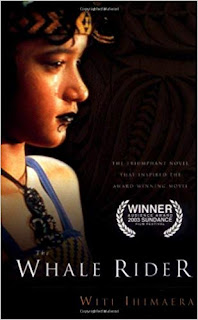 The Whale Rider, by Witi Ihimaera

I was pretty excited when I spotted this novel on the donation table; it's currently not that easy to find in the US.   It's also shorter than I expected!  This cover make it look kind of like a kid's book but I would say that it is maybe more YA.  It's one of those novels that kind of defies age categories, really.

The story is told in two interlocking parts: one side is mythic, about the far past and about the whales.  The other is narrated by a young Maori man, and it's really about his niece, Kahu.  She is the first-born of her generation, and the family patriarch, Koro, is extremely displeased, because he expects a boy to be the chief and carry on the family heritage -- they are descended from the legendary whale rider.  Kahu adores Koro, and spends her childhood following him around, bouyantly ignoring his indifference.

When an entire pod of whales beaches near the village, Koro believes that it's a watershed moment for his family.  If the whales can be saved and persuaded to go back to the sea, it will be a new birth for the humans of Wharanga too.  If they can't, it will be the end.  But the ancient bull whale that leads this pod misses his wonderful rider.  Is there anyone to take his place?

It's a beautifully crafted novel, and I enjoyed every bit.

A film was made in 2002, and I'd like to watch it.  They made Kahu older (which makes sense; the novel takes her from infancy to maybe 10 or so, and they would have needed five or six actresses), and this film seems to have more martial arts than the story does (which is none).  Looks pretty good, yeah?  It won an award at Sundance.

Oceania literature read around the world YA lit