Dancing With the Viper 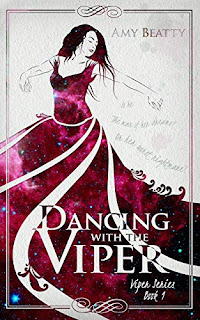 Dancing With the Viper, by Amy Beatty

A few months ago I told you about my friend Amy, whose novel Dragon Ascending was published last October.  She also has a second series going, and I bought myself a copy of this first installment in the Viper series.  It's available in paperback and on Kindle, and there are a couple of short stories on her website too!

This is Amy's 'complicated politics in a galactic empire' story, but it doesn't start that way.  We start at the edge.

The Talessanin made contact several years ago, and they have an embassy on Earth now, but Hanna has never actually met one of the aliens before.  Now she has a Talessanin for a neighbor, and she's not entirely sure she wants the company on her cherished lonely country road.  Still, one must be neighborly, so she takes a welcome cake over and meets Jon, a retired soldier, and his two friends? assistants?, Chance and Tomin.  Pretty soon Hanna (and her friends) are getting to know the Talessanin guys well, and while she is drawn to Jon, she's also wary of getting involved with anyone at all.  Jon, for his part, has a lot of secrets of his own, and he's not just any retired soldier -- plus he has a bunch of relatives and family connections with very definite opinions on what he ought to be doing with his life.

So here we have a romance/SF/thriller, and there's a good bit of romance.   Apparently the genre-crossing kind of stymied publishers, who loved it but didn't know what to do with it.

I really enjoy Amy's storytelling.  She's just really good at drawing the reader in.  Even though I was reading on my phone -- normally something I will do anything to avoid -- I could hardly put it down.  There are bits I've gone back and read several times now.  I don't usually do romance, but I liked this one.  I may buy it in paperback too.  If you like romance/SF, give this one a go.
SF/fantasy