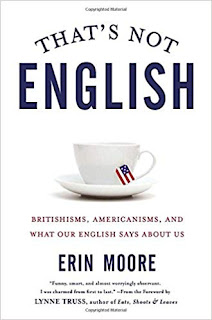 That's Not English: Britishism, Americanisms, and What Our English Says About Us, by Erin Moore

This was a fun, fast read that I enjoyed a lot because I will never not want to read books comparing the British to Americans and vice versa.  I cannot get enough of those.

Erin Moore is American-born, moved to England, married into a trans-Atlantic family, and is now raising a little Briton of her own, so she's had plenty of opportunity to experience culture shock (both ways) and delve into the mysteries of our respective characters.  Each chapter is dedicated to a word or expression that either means different things to each side (quite, sorry, cheers, ginger) or is practically unknown to one side (knackered, bespoke, dude).  So, some random observations from me:

Indeed, I use quite as an intensifier that means just plain really.  Apparently Britons aren't quite that enthused when they say it.

Indeed my kid's red hair has always been considered enviable, and pretty much only that.  She considers 'ginger' to be a term of pride.

Someday I'd like to see a real British pantomime.  I'd be completely bewildered, even though I do kind of know the basics.  One of the strangest sentences in this whole book is about American actors appearing in panto: "In recent years, both David Hasselhoff and Vanilla Ice have played Captain Hook in regional English theaters...as I write this, Henry Winkler -- the Fonz himself -- is playing Hook in Liverpool."


Moore says that if there is one Americanism that Britons never, ever pick up, it's dude.  I would LOVE to talk about dude, folks, so any British people reading this, you have to tell me what you think about dude.  I, being a California girl, cannot go an hour without saying dude.  I don't notice that I'm doing it -- it's a less noticeable word than like (which I also say, but not nearly as much).  I clearly remember being in Denmark, in 1989, and trying to help the English teacher learn how to say dude.  You have to say it in that particular way, you see. 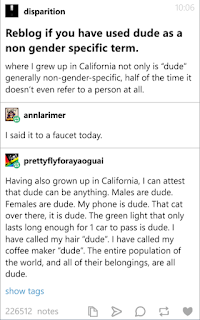 And here's the thing about dude: it is the single most flexible, most adaptable word in English.  You can use dude to express virtually ANY emotion, with the possible exception of deep, heartfelt love.  Deep, heartfelt sympathy, yes absolutely, but preferably not a marriage proposal, though I'm sure it's been done.

Of course, you've seen the little meme going around about how dude can address anyone and anything.  Or maybe you haven't, so I'll put it here.  It is completely true.

I can quite see that a Briton would probably find it a non-comfortable word to use.  I'd just like the discussion.