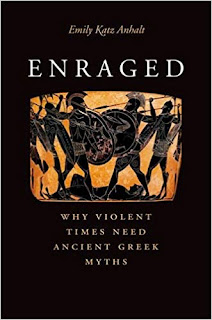 What?  Why would a modern, 21st-century society need stories told by a bunch of Greeks over 2000 years ago?  Well, Emily Anhalt is here to tell you, and she is dang good at it.  I enjoyed this book a lot!

Anhalt's thesis is that human beings are just the same as they always were, and the ancient Greeks gave these things a lot of thought.  She analyzes the Iliad and the plays Ajax and Hecuba for themes that hit close to home for us today.  All of them are about rage, and there's a lot of that going on right now.  She doesn't talk specifics -- there's enough rage to go around anyway

The Iliad is all about rage.  Achilles and Agamemnon both have a lot of it, and it has tremendous effects -- none of them good.  Achilles' rage leads directly to the death of his best friend, and that's only the beginning.

Sophocles' Ajax covers an episode just after the Iliad, in which Ajax and Odysseus have contended for the right to Achilles' armor.  Odysseus used his rhetorical skill to convince a panel of warriors that he was the best, despite Ajax' obvious better claim.  Humiliated and enraged, Ajax goes mad and kills a lot of cattle in the delusion that they are the Greek leaders.  When he comes to his senses, he falls onto his sword.  Anhalt shows that Sophocles was meditating on the limitations of democracy -- a majority vote will not always be the correct decision.  In order to work well, democracy must be accompanied by the willingness to see others' points of view, to compromise, to work together.  Ajax, an old-school aristocrat to the core, can't understand democracy or its necessary corollaries...but he can point out the problems of democracy badly wielded.

Euripides' Hecuba is even more violent and despairing.  Hecuba, the deposed queen of Troy, is now a captive slave.  She has one daughter left to her, and the hope of her youngest son's survival, since he was sent to live with a friendly king.  As the Greeks are encamped, about to leave, Odysseus arrives and requires the daughter, Polyxena, for a sacrifice to Achilles' shade.  Hecuba warns him that the powerful should not abuse the powerless or think they'll always be victorious, but Odysseus takes the girl anyway.  Hecuba's son's body, murdered, then washes up on shore just before the friendly king shows up, pretending innocence.  Mad with grief, Hecuba has his two children murdered before killing him; having been denied justice, revenge seems her only option.

(In 1995, I went and saw a prestigious production of Hecuba that starred Olympia Dukakis.  I had only the barest idea of what a big deal that was supposed to be, but it was certainly an excellently-staged play.)

Enraged is a great read, because Anhalt is wonderful at demonstrating the meanings and nuances of Greek literature.  I'd love to hear her lecture.  This book is packed with fascinating insights.