By Jean - February 20, 2019
One of my very favorite yearly events is March Magics, when we read and discuss two of the greatest fantasy writers around, Diana Wynne Jones and Terry Pratchett.  It's hosted by Kristen at We Be Reading, and the theme this year is "Riches Well-Told."  Kristen says:


What does that mean in terms of books? It means we get to read our favorites this year! I want everyone to pick up the books from these authors that never get old, the ones that we've read dozens of times already but plan to read at least a dozen more times. 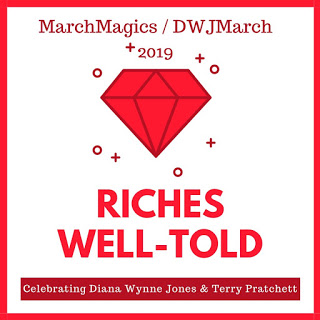 The DWJ readalong this year will be Howl's Moving Castle, and the Pterry title has yet to be chosen.  Kristen is running a poll at the announcement post, and I voted for Wee Free Men on the grounds that I haven't read it in a long time.  (Update: it's official; Wee Free Men!)  I'll have to think about which favorites I want to read in March....it's hard to choose!  There are so many to love.

I just realized I'm wearing my Death "I could murder a curry" t-shirt as I type this post.  It was a Christmas present.  If only there was a good DWJ t-shirt out there -- does anybody have a good DWJ image I could put on a t-shirt?

Oh, I'm excited about March Magics!  There is going to be all kinds of good stuff going on in March, what with the Welsh literature event, and isn't there an Irish one too?
DWJ Month