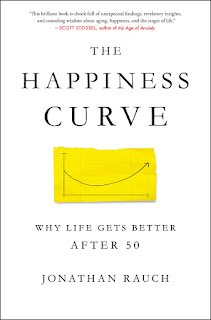 The Happiness Curve: Why Life Gets Better After 50, by Jonathan Rauch

All through his forties, Jonathan Rauch* was fairly miserable, and he didn't really have a good reason to be.  His career was doing well, he'd accomplished more than he'd dreamed of, his personal life was happy, he was healthy and strong -- and yet he couldn't stop telling himself that he should be doing far better.  He often felt like bolting from his perfectly good career.  Was this a midlife crisis?  Was he just a really ungrateful, terrible person who didn't appreciate his blessings?  The more he scolded himself, the worse he felt.

As a journalist, though, he could find out some things, and in fact he found out quite a bit.  It's quite stunning to me, but it turns out that it is normal to be kind of miserable in your 40s, approximately.  It happens across cultures, in every country.   In fact, it's hard-wired into us and other great apes do it, too.  Of course, our circumstances have a lot to do with it too; we're talking about an aggregate, shadow effect here, a tendency.

In this fascinating book, Rauch unpicks the causes of mid-40s malaise, calling it the U-curve of happiness.  It seems to be part of our brains reprogramming, changing from the ambition and high expectations of early adulthood to a more mellow, accepting, and even altruistic mindset.  American culture tells us that aging is terrible and we can expect to grow steadily unhappier after 45, but in fact it seems that people become, on the whole, happier after 50 -- even in the face of health problems and other life difficulties.  It becomes easier to be grateful and enjoy the moment.

Everybody over 35 should probably read this book, or the article that was its forerunner, or at least find out about it.  In fact, just knowing about the effect is a help, because then you know you're not just a terrible, ungrateful weirdo, or a person who needs to trash everything and escape your ordinary life; you're just going through a natural phase which will eventually end.  And Rauch hopes that we'll develop structures to help people transition, much like how we once assumed that teenagers were just gangly adults, but now have things like high school and a knowledge of adolescent development.

Check this book out from the library for your 40th birthday; you won't be sorry.

Long ago, when I was 30 and he was 66, the late Donald Richie, the greatest writer I have known, told me: “Midlife crisis begins sometime in your 40s, when you look at your life and think, Is this all? And it ends about 10 years later, when you look at your life again and think, Actually, this is pretty good.” In my 50s, thinking back, his words strike me as exactly right.

Interesting, but I don't think getting happier happens by itself. It takes work, and the resources to do that work, otherwise the trajectory can go down rather than up. However, I can relate to the 40s being a difficult time, and look forward to better days ahead (but I would not have given up those hard times for anything).