A Fall of Moondust 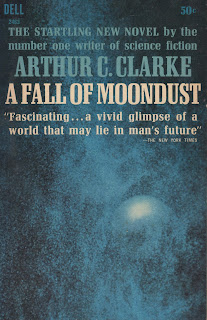 A Fall of Moondust, by Arthur C. Clarke

I got a bit bogged down in my Vintage Sci-Fi reading when I picked up an Alfred Bester novel and didn't love it.  I will still finish it, but I wanted to do one more fun read before the month was over, so I picked this 1961 Clarke novel that looked interesting.

In the not-too-distant future (from us; I think this is set around 2020 or so), the Moon has a few cities and a small tourist trade.  Pat Harris and Sue Wilkins run a Moon bus-ship, the Selene, for trips across the Sea of Thirst.  This large crater is filled with moondust, which acts almost like a liquid -- though it doesn't ripple.  A moonquake pulls the Selene down under the dust, trapping 22 people alive.

This is a technical problem novel which made me think of a cross between The Poseidon Adventure and The Martian.  Can the Selene be found?  If it's found at all, how to bring it up from under unknown fathoms of dust?  Inside, how to keep 20 tourists from panicking, or suffocating?

I enjoyed this one a lot.  There's a nice balance between human problems and technical ones, and Clarke (a mathematician and physicist) has a good grasp of the science involved; he knows, for example, that dust on the Moon won't billow or puff, though he doesn't know that real moondust is extremely sharp and abrasive -- that was a surprise for when we actually got there, eight years later.

The cultural artifacts from 1961 are pretty fun too.  There is no mention of computers.  A passenger on the moonship wants to smoke, and there's an emergency cache of 1000 cigarettes on board -- though their buried status precludes actually lighting up.  One lady passenger is strictly girdled.  It's pretty much 1961, just on the Moon.
SF/fantasy