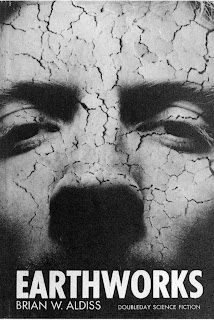 Here's my first Vintage Sci-Fi book for January!  Brian Aldiss started writing in the mid-50s, so this isn't quite an early novel, but it is fairly early on in his decades-long career.  It was published in 1965.

A couple hundred years in the future, Earth is living a Malthusian nightmare.  The population is 24 billion, nearly everyone is desperately poor and malnourished, and practically all the land is turned over to farming in the poisoned and depleted soil, so everything is massively toxic.  Synthetic, poisonous food is routine, and the whole world is a police state.  Robots are more valuable than people and do most of the work.  African nations now lead the globe, and their unifying president is the only person who can hold the whole thing together.

Against this background, Knowle Noland chronicles his life.  He is one of the few literate people in the world, and he used to be the captain of the Trieste Star, a practically-unmanned freight ship that he beached in a hallucinatory frenzy.  (Knowle hallucinates a lot.)  The story is somewhat disjointed, but he tells about his past and then wanders around the new coastal city of Walvis Bay, captured by a fanatic pair who plan to assassinate the African president in order to start a giant war that will mercifully kill everybody off.

I wasn't too wild about this story; I just didn't enjoy it much at all.  It wasn't entertaining or compelling or fun.   There's a lot about overpopulation and how everybody keeps having children because they don't know any better.  At the same time, there are only two women in the whole book; one is a fanatic who thinks having children is a crime, and the other an elderly housekeeper who had 15.  The men pretty much never meet any women, and nobody except the housekeeper has any children.  Anyway, this is a world where high-yield crops were never developed and birth control never caught on.  Maybe 50 years ago that was a more persuasive storyline.  Now, we're set to have world population start falling steeply in about 30 years, and we've massively increased crop yields and virtually stopped increasing acres under cultivation.