Jim at the Corner 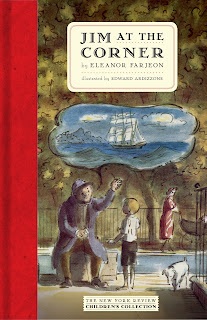 Jim at the Corner, by Eleanor Farjeon

Just a little post to tell you about the lovely storybook I got for Christmas.  I've always been a dedicated Eleanor Farjeon fan, and wore out the copy of The Little Bookroom I had when I was a kid.  I only got to read her other works after I was grown up and could use the power of the internet to buy used books!  Happily for me and for many children, the New York Review re-published The Little Bookroom and another Farjeon title I'd never seen before -- Jim at the Corner.  It's not a long book at all.

On the corner of Derry's street, a retired sailor spends his days sitting on an old orange box.  The people on the street take care of Jim, and the children crowd around him to hear his stories of when he was a youngster sailing as mate on the good ship Rocking-horse.  Each chapter has a tale taller than the last -- the time Jim's ship was stuck fast in the ice in Antarctica for three months, and made friends with the penguins, or the time they were becalmed and the fog was so thick that Jim swam right through it to the Isle of Plenty.  Or what about the time Jim caught a kittenfish, which was green and became the ship's cat, but eventually had to be given back to the Queen of the Catfish, who held Jim hostage under the sea until she got her kitten back?

This is a really nice little collection of fun tales and would be a perfect nightly read-aloud for a lucky 5-7 year old.  I wish it had been in print when my kids were that age!  Plus, it's illustrated by Ardizzone, which always fits so nicely with Farjeon's writing.
children's literature English literature