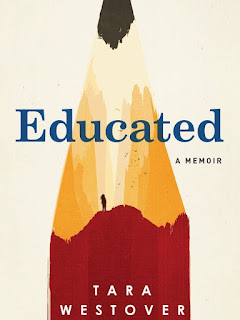 Educated: a Memoir, by Tara Westover

I've been hearing about this memoir, but I wasn't going to seek it out.  A friend of mine is visiting and said I should read it, so she lent me her copy...and I was hooked.  I read it in three hours!

Tara Westover was raised in very rural Idaho as part of a survivalist-minded family.  Their dad was convinced that the government, doctors -- well, anything establishment -- was out to get them.  The Ruby Ridge incident convinced him a good deal further.  As is often the case, they got more extreme over time, so that the oldest kids went to public school for a while, but the younger kids did not have birth certificates and never went to school at all.  The mom, who started off a home herbalist, was encouraged (well, pushed) to become a not-quite-illegal midwife and full-time healer.  In theory, the family homeschooled, but the necessity for work overrode most educational pursuits, and after a while they figured as long as you could read, you were fine.  Tara was the youngest of this family.

Westover's dad worked very very hard, mostly in scrap and sometimes in construction.  But the need for money, and it seems his own issues, drove him to cut corners and totally disregard safety.  The whole memoir is thickly strewn with dreadful injuries and car crashes, paired with an utter refusal to go to doctors, take even the mildest pain-killers, or put on seatbelts.

And then there was the abuse inflicted by one of the older brothers.  Tara recounts her experiences as a teen, but later realized that the other siblings suffered too -- it was just when she was much smaller, and not something she saw herself.  People, it's a horrific account.  But all of this was ignored and smoothed over by a family that was tightly interwoven and dependent on not recognizing reality.

Escape was offered by Tara's older brother Tyler, who was always the bookish one and had insisted on going to college.  He told a sixteen-year-old Tara that she could go to college, too.  BYU would take homeschoolers, so all she had to do was get a 27 on the ACT.  Tara could read very well (having been raised mostly on 19th-century religious texts), but her math was minimal and her science non-existent.  She didn't think she could possibly take the test or go to college, but Tyler helped and she did it.

I guess I can't summarize the whole story for you, but Westover details a long, hard struggle to become educated and extricate herself from the tangled mess of her deeply-loved, incredibly dysfunctional family.  That second one is the harder job.  As Westover moves through BYU, then Cambridge, and then Harvard, she slowly starts to figure out how bad the situation is.  Her dad is getting more erratic (she figures he is probably bipolar) and then is burned in a ghastly accident, which paradoxically launches the family into the essential oils field, where they are now a large business.

The end result is that Westover is close with a couple of brothers -- the ones who also left -- but can't contact others.  The remaining family members say she is dangerous and deluded.  The entire memoir is causing a bit of a kerfuffle, as Westover is accused of lying and making up the stories in the book.  I don't really see why she would do that.

Tara's family is LDS, as am I, but I think she is quite correct in trying to emphasize that their religion was not material to the family problems.  Her dad's ideas were clearly based in mental illness and survivalist rhetoric, though of course he picked bits out of their religion to justify his narrative.  He seems to me to have ignored a lot more.  The only thing I would say is that during her time at BYU, Westover seems to have worried that she might have been the only female student around who wanted to go into academics.  I suspect that the difficulties she describes made it hard for her to see the others; I find it quite impossible to believe that that there were no other ambitious female students or  professors.  Tara is my baby sister's age, 15 years younger than I am, and I certainly knew quite a few back when I was a student in the early 90s (even at BYU, which I did not attend).

It's an excellently-written, gripping, harrowing memoir that deserves the attention it's getting.  My only caveat is to say that if you come from a family with severe mental illness and abuse problems, it will probably be too difficult for you to read.  Everybody else should take a look.