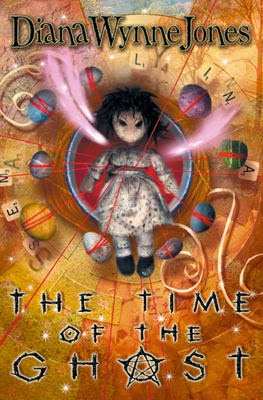 The Time of the Ghost, by Diana Wynne Jones, and The Ocean at the End of the Lane, by Neil Gaiman

These two were both re-reads, but I specifically wanted to read them together and compare.  I had only read Ocean once, so it was really nice to go back and notice a lot of details that had become fuzzy or that I maybe hadn't noticed the first time around.  I know Time of the Ghost very well.  I have talked about both of them here before--here is my review of Ocean, and here is Time of the Ghost--so I don't want to re-state those thoughts.

When I first read Ocean, I thought it was probably Gaiman's sort-of tribute to DWJ, whom he famously thought a lot of.  Jenny thought so too, and then she actually met Gaiman and he SAID SO and that he thought it was most like Time of the Ghost.  I would like to know much more about his thoughts on that!  Thus this pairing of reading and this post.

I'm not a dedicated Gaiman fan--I always read his books, but I don't follow him online or anything, although I am always so impressed by his speeches on libraries and books and freedom that I really ought to because he says a lot that I think too, only he says it much better--(deep breath, that sentence kind of got away from me there) so maybe he has said something about his thoughts on this and I just don't know it.  (If you know of something, send me a link!)  Honestly if I met him IRL I would probably want to talk about DWJ and her amazingness, and ask him about that.  So. 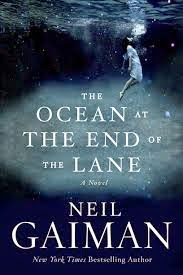 Elements in Ocean that I see echoing Time of the Ghost include--well, most obviously, an old (ancient) female monster something from another...plane? that wants to suck the life out of people and anything else she can get.  This was a thing with DWJ, hungry mothers and variations thereupon, and I don't remember Gaiman doing it much before. He softens the idea with the Hempstocks, who are at least as ancient, but benevolent.  Also, a preoccupation with the local landscape and the particular homes of people, very detailed.  Anybody notice anything else?  Some images, I think--waving fabric, perhaps, and worms.

It's a good experience, reading them together, so I do recommend it as an interesting exercise.

One last thing--Gaiman opens Ocean with a quotation from a New Yorker article that was a conversation between Maurice Sendak and Art Spiegelman, published in 1993.  I remember that article!  A friend of mine was given it by his sister and I remember the dialog and the drawings on the page vividly. Here is a good copy of it.