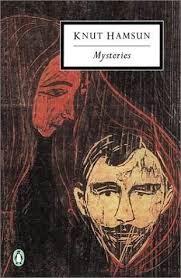 A few weeks ago, Tom at Wuthering Expectations posted a casual invitation to join him and a few others in reading Mysteries with this:


All too soon Ricardo de la Caravana de recuerdos, and I hope many, many others, will join me in a reading of and conversation about Knut Hamsun’s 1892 novel Mysteries.  If it is like other Hamsun novels, some of that “conversation” will be closer to stunned silence and questions like “What is this?”

Well, I could hardly refuse an opportunity to ask "What is this?" so I joined in.

Mysteries is an 1892 novel by the Norwegian Knut Hamsun (whose name confused me until the introduction explained that it was Hamsund, after the family's farm, but a printer's typo inspired him to drop the D permanently).  He was something of an iconoclast in Norwegian literature, determined to smash all orthodoxies and write "a new literary psychology" that was all about the stream of consciousness and its unpredictable nature.  In other words, he anticipated Virginia Woolf by a couple of decades, I guess?

It is certainly a weird novel.  The plot:

A stranger, one Johan Nilsen Nagel, arrives in a small coastal town and spends the summer for no apparent reason.  He is given to telling wild, contradictory stories about himself that always seem to end in some very disconcerting manner.  He helps people secretly, pretending that he is doing no such thing.  Nagel falls in love with the local beauty, who is engaged to a sailor, and he confuses her until she barely knows what is happening.  He pursues another woman, a very poor spinster much older than himself.  And he carries a vial of cyanide in his breast pocket.

The back of the Penguin edition calls Nagel (which means 'nail') a modern, almost parodied Christ figure, and the two women Mary and Martha.  I can't say I see it myself, but OK.

Nagel is a very strange guy.  He talks voluminously to anyone he can buttonhole, and he contradicts, makes wild assertions, and tells stories about himself which always seem to show him in a bad light (at best; they often end bizarrely).  Almost everything he does in public seems calculated to give a bad impression of himself.  In secret, he either carries out charities or, more often as the novel progresses, sits and thinks for long chapters in a stream of consciousness that is just as strange as the stories he tells.

Dagny is the local beauty, well-off and prominent in the town, with several suitors.  She has just become engaged to a sailor who is now at sea, and at first she enjoys hearing this unusual Nagel talk.  She is socially secure enough that she can take long walks at night with (single male) friends, and she goes on several with Nagel, but after a while his strange tales give way to pleas for her love.  She doesn't know what to do with the stream of contradictory talk and promises that Nagel pours on her. Is she attracted to him?  It seems more that she is fascinated by him because he is so strange.

Nagel also has an opposite number--the local wretch and butt of jokes, nicknamed Miniman.  Once a sailor, he has an injury which renders him only somewhat mobile; his uncle works him hard and he is tormented by many of the townsfolk.  Nagel seems to befriend him and secretly gives him better clothing, but their talks become more and more like rants and interrogations on Nagel's part.  Soon he is tormenting Miniman as much as anyone else does.

Throughout, Nagel keeps quoting a line which he attributes to Victor Hugo (but it isn't) that holds great meaning for him, but which is pretty strange to me.  "May your steel be as sharp as your final no."  There you go--a mystery all the way through.