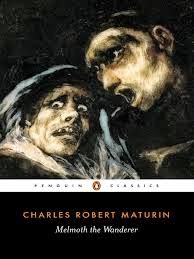 Melmoth the Wanderer, by Charles Maturin

I've done it!  I read Eugene Onegin's favorite novel!  Melmoth the Wanderer was published in 1820 and is, in some ways, the culmination of the Gothic novel.  It uses every trope--in fact I'd say it over-uses most of them.  What could be more appropriate to RIP month?

The novel is a series of stories within more stories, and then more, until you wonder how you will ever climb out.  It is also, let me just warn you, the single most anti-Catholic novel I've ever read.  Hundreds of pages are devoted to the horrors of monastic life, the greed and cruelty of power-abusing monks, the Inquisition, and the power abuses of priests.  I am not even kidding.  Apparently Spain is populated entirely by power-hungry priests and their terrorized subjects.  Now, to be fair, there are a couple of good Catholic priests in the story, but on the whole it is just awful, the sort of tripe that was such common fare in 19th-century England.  Now, on to the story:

A young man, John Melmoth, is summoned to his dying uncle's bedside and left to deal with the estate and the legend of an ancestral uncle who (it is hinted) dealt with the devil.  He finds an old manuscript--even less legible than most old manuscripts in novels--and reads the story of one Stanton, who long ago searched for the legendary Melmoth but did not find him until he was imprisoned in a madhouse, where he is visited and offered escape, at a price.

Then there's a shipwreck near the estate, and the only survivor is a Spaniard, Alonzo Monçada, who tells his life story as he recovers.  This Spaniard is a former monk; he was brought up in a monastery and forced to take his vows, and just as he escaped he was turned over to the Inquisition.  Melmoth visits him and offers him escape, at a price.  Monçada instead escapes during a fire, and ends up sheltering with a Jew who lives underground in a secret chamber, and who gives him an old manuscript to read!

The manuscript tells the story of Immalee, a young girl shipwrecked alone on an island on the coast of India.  She grows up alone, with Nature for her parent and teacher, and the locals worship her as a goddess, the island having always been sacred to a goddess anyway.  (The description of India is hilariously naive and clumsy.  It's just so funny.  Hindu temples are described as pagodas, and so on.)  Melmoth visits her and tries to take away her innocence, but she falls in love with him instead.  Years later, restored to her Spanish family and now known as Isadora, she secretly marries him in a ceremony done by an undead hermit.  Meanwhile...

After this we go back to Isadora, who is about to have Melmoth's baby even as her father is arranging her marriage....and at this point we start climbing the stairs back to the original tale.

Here we have six separate stories nested together, all of which combine their hints to make a picture of the life of Melmoth the Wanderer, who has lived for about 150 years after making a bargain with the devil.  He can go anywhere, enter any locked room, but he spends the time searching for someone who will take over the contract for him, but no one ever does, even though he chooses the most desperate and unhappy of people.


'No one has ever exchanged destinies with Melmoth the Wanderer. I have traversed the world in the search, and no one, to gain that world, would lose his own soul!–Not Stanton in his cell–nor you, Monçada, in the prison of the Inquisition–nor Walberg, who saw his children perishing with want–nor–another'– 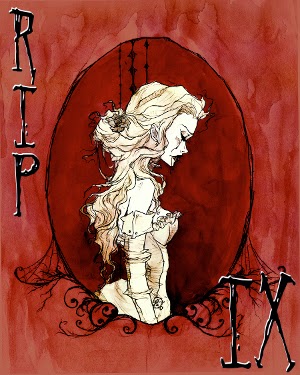 You can probably see why I say that this novel over-uses Gothic tropes.  It takes all of them and turns them up to eleven, with the result that I was constantly kind of annoyed, even as I was entertained by the sheer volume of melodrama.