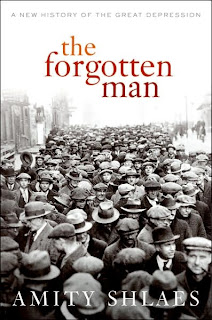 The Forgotten Man: a New History of the Great Depression, by Amity Shlaes

Amity Shlaes is a well-established journalist and historian in the field of economics.  Her new look at the economics of the Great Depression made quite a splash in 2008, and I've been meaning to read it ever since.  Score one for the TBR pile!  Shlaes offers analysis of how Presidents Hoover and Roosevelt responded to the 1929 crash and subsequent depression, chronicling the actions of the movers and shakers of the times.  It's a big-picture history; we see New Deal policies in action, the decisions in Washington, and the rise of large unions, not portraits of individual farmers and workers.

We start in 1927, getting some background and the political climate of the time.  The economy is roaring and many people are getting modern conveniences such as electricity or even a car for the first time.  Leftists have their eye on the new Soviet Union and think it is just great, so a delegation of Americans visits for a tour (that part is fascinating).  Shlaes then takes us through the crash and Hoover's response to it--for example, the disastrous Reed-Smoot tariff, along with other things that were more beneficial.

Most of the book concentrates on FDR and the New Deal--and it's not as good a picture as Americans have tended to think.  Roosevelt was into moving boldly, and he was not interested in consistency.  The capricious price-setting he and his colleagues indulged in is just plain frightening.  He railed against big business, and then instituted massive regulation that mostly damaged small businesses (and often the consumers most of all).  He went after random small businessmen, which scared everyone--the illustrative case was especially interesting to me since it involved brothers running a kosher chicken slaughterhouse.

We also see how local communities reacted to the Depression.  Some instituted barter or unofficial currencies.  Father Divine, a charismatic black preacher, held public feasts and bought property to settle people into.  Bill Wilson started a new kind of group for alcoholics, building a supportive community to help people kick the bottle.

Shlaes concludes that a lot of what FDR did prolonged the Depression and made it worse.  She offers a lot of information to back that up.  And much of it sounds discouragingly relevant to us today.  Shlaes brings up some good questions about the difference between classical liberalism, concerned with individual liberty, and 20th century progressive liberal politics, focused on collective action.  Roosevelt was a "liberal"--but what exactly did he mean by that
?  It's important to get the definitions straight.

A very good book, and really interesting.  Sometimes it dragged a bit, as economic history is wont to do, but for the most part it was surprisingly hard to put down.  I was interested to see that a graphic novel version is being prepared for publication--perhaps for those of us with shorter attention spans.
history TBR challenge