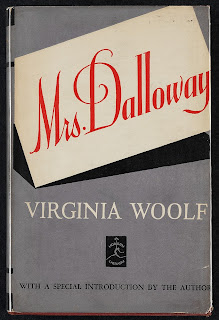 Happy July!  Or, good luck hiding from the heat, depending on where you are.  I'm hiding, with occasional forays to swimming pools.

The WEM ladies have been reading Mrs. Dalloway, and I particularly wanted to join them, as this is one of my CC titles but I, for one, am quite afraid of Virginia Woolf.  I haven't read much of her before, I'm not too big on Moderns anyway, and I always get annoyed by her snobbery, so I needed company!  But I was in fact quite surprised by how much I enjoyed the book and that I didn't find it nearly as difficult as I expected (I was figuring on something not too far removed from Ulysses).

The book takes up one day and revolves mostly around Clarissa Dalloway, a middle-aged lady who is preparing to host a party in the evening.  I thought it would be entirely about Clarissa, but the point of view jumps around to various people, passing from one to the next as they intersect throughout the day.  We spend time following Clarissa's old love Peter, grown daughter Elizabeth, a young man suffering from severe shell shock and his Italian wife, Elizabeth's history teacher, and more--some only for a moment.  There is not exactly a lot of plot, but as we see the various characters' thoughts and actions, we get a picture built up of relationships and social structure.  And at the end of the day, Clarissa's party brings many of
these people together, even some from the past.

It reminded me a bit of a Seinfeld episode, actually, though without the comedy.  That is probably terrible.

There is plenty to think about here.  As I said above, I was surprised by how much I enjoyed the book.  I might even read more Woolf someday.
classics